Napier is known for it’s Art Deco architecture, and it fashions itself the ‘Art Deco Capital of the World’. So Marion (whom I met previously in Opotiki) and I set out to walk around the town and see the sites. It was quite a bit longer than originally planned (the loop below is what we ended up doing – all 14km of it).

The part marked ‘Big Hill’, well that is indeed a big hill cutting through the middle of the town. But first, it was to the waterfront area, where most of the tourists will flock to. Just a series of pictures to follow for that part. The first one is actually of my hostel, a pretty nice place really. 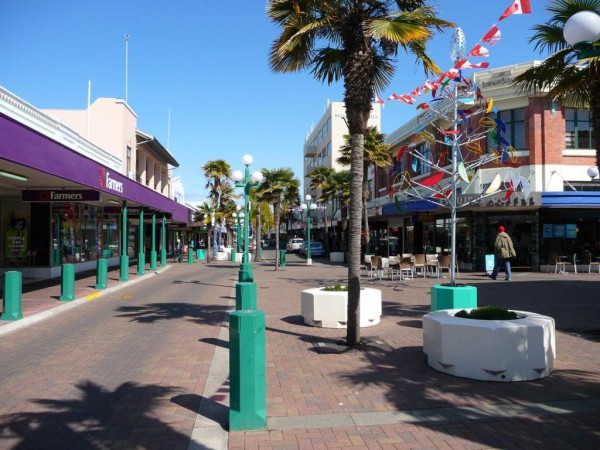 I’ll be the first to admit – Art Deco does absolutely nothing for me. It just doesn’t look good I find. But Napier is known around the world for it’s Art Deco stylings. The style of the town came out of a disaster – in 1931 a massive earthquake hit the region (7.8 magnitude) and destroyed much of the city, both from the quake itself and it’s 500+ aftershocks, along with the fires that ensued after the initial destructive wave had passed. The earthquake had such a profound effect on the area it lifted and drained large parts of the surrounding seabed 2+meters above where they were previously. Even after the devastating Christchurch earthquake this year, the 1931 quake in Hawkes Bay/Napier is the deadliest quake to hit New Zealand, killing 256 and injuring thousands.

Once the rebuild in 1931 began, the architects chose to follow the design style of the time – Art Deco. Thus a large portion of the downtown and waterfront was rebuilt using art deco architecture, which remains to this day. And being a UNESCO protected site now, most new buildings near the downtown core have to follow suit. Still, while I’m here in the off season, the Art Deco style here seems a bit in disrepair. Quite a few buildings looked well past their prime and needing new paint and a cleaning. The colours were faded and cracked. All in all, I was less than enthused about the architecture. That being said, Napier did have some lovely outdoor parks, greenspaces and gardens within the city. Follow on for another set of photos… 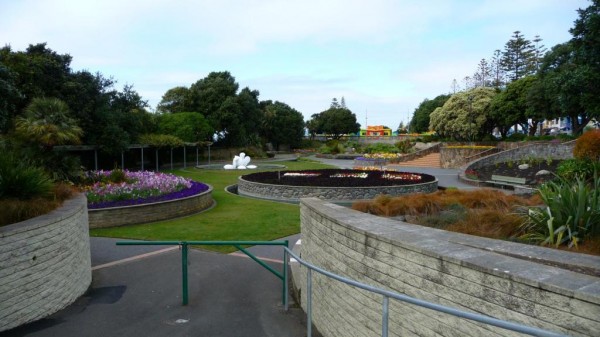 Finally, after wandering the flat part of Napier, Marion and I started up the steep hill called Bluff Hill.

An exhausting climb, especially after my extensive hiking the previous day (which I’ll post about following this). The views were pretty good.

The odd part was that you couldn’t get a decent vantage point of the downtown of Napier itself – mostly what you get to look at was the port:

I enjoyed watching the port in it’s own fashion – it was like watching toys scurry around.

The clouds had been rolling in and out all morning, and at this point they started spitting down rain a bit. We descended the hill and then made the decision to take the longer way around the hill going back. I figured the hill didn’t look THAT big. Oops. Took us around 90 minutes to complete the outside part of the circuit around the hill, and the scenery was entirely drab – it was the industrial section of Napier. The hill does have the nice effect of obscuring the entire industrial park from the sight of the rest of the town. Out of sight, out of mind and all that. Eventually, Marion started using ‘hungry’ and ‘angry’ interchangably (‘h’ is silent in French), so we found a spot to grab a small snack (ice cream, of course). And after one last stop where I found street signs that reminded me of both Sarnia and Vishnu (see below), we finally made it back to the downtown, some 3+ hours after we had left.