A few days delayed getting this one up, but a couple days ago I awoke to a gorgeous sunny day. Having sufficiently rested from the hiking Steff and I had done on our way to Napier, I packed my daypack with a banana, several granola bars, filled my water, and added extra weight – my laptop, AC adapter, Kindle, extra sweater, and a light jacket. I was on a mission – do a half-day (4-6 hour), relatively strenuous hike.

I hadn’t made mention of my hip bursitis recently because I had hoped that it was fully in the past. There are still twinges of pain every now and then during steep ascents, but nothing lasting nor debilitating. But all of my hikes in the last few weeks had been of the 1-2 hour max. I needed something to test my legs out a bit more thoroughly, along with getting used to carrying weight on my back/shoulders for longer periods of time. What I needed was an endurance hike – I found it at Boundary Stream Reserve.

Boundary Stream is about an hour’s drive from Napier, heading back toward Gisborne, and on gravel roads for half the distance. You’ll have to click on that picture to spot the hike I decided to attempt – it was #4, in Red – Kamahi Track to Shine Falls. The text reads – “Walking Time (this would be one way) 4 hours, Distance, 8.3km – This track is suitable for experienced trampers only. It enables visitors to experience a cross section of the reserve’s features including a rich mix of Tawa, Isinsu, Matai, Rewarewa and many birds such as the North Island Robin. From above Shine Falls the track descends steeply through stands of Rewarewa, to reach the bottom of Hawke’s Bay’s most spectacular waterfall.”

When I read the description and saw the times (8 hours round trip, 16.6km), I knew which track I was attempting. I was confident that I could complete the track well under the DOC listed time – the Department of Conservation is VERY conservative with timing estimates, and I’d be cutting a bit of that distance off: The track distance is to the park exit, I’d be stopping at Shine Falls and turning around. Really, about 12-13km round trip. Still, it was going to be a challenge, because the terrain was very rolly polly.

Away I went. The trees started kindly enough, with a fairly well-formed track. For the first part, I followed another, more commonly walked and shorter loop track. 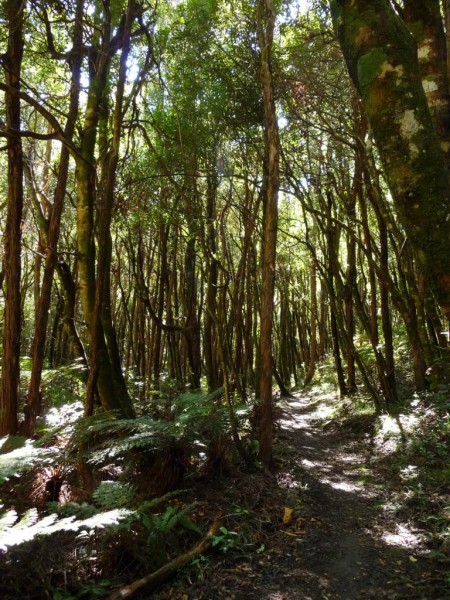 The easy track also got a couple nice lookout spots along the way.

After 30 minutes, I reached the branching point of the trail. If I continued on, it would be a further 4-5km to my destination of Shine falls. Or I could just finish the small loop I was on. So far, it had only taken me 30 minutes to go 2km, so I knew the DOC was being very conservative again. But what about an ‘experienced trampers only’ track? Well, I decided to find out.

The track immediately got less used looking and descended sharply. I took note of that – I’d have to hike back up (ugh). After flattening out, the track was similar to before, just a bit more rugged and hilly. That, and stream crossings:

The first crossing was the hardest, with fairly fast flowing water and slippery rocks. Thank goodness for waterproof shoes. Eventually, 90 minutes after I left my car, I reached a steel bridge.

I knew I had reached my destination. Not only because of the signs, but also because the track was much improved here. The short track, accessible from the other side of the park, is the one much more often taken.

2 minutes on the new path, I was a little apprehensive – would my goal have been worth the trouble? The hike HAD been difficult, and I was only half way – I had to get back to my car, 6+km away on mostly uphill terrain. I needn’t have worried once I got my first glimpse.

Finally at my destination, Shine Falls. The highest falls in the Hawke’s Bay region at 59m, it was a picturesque and extremely pleasant spot to stop.

And yes, I was quite happy…and tired..and a dork.

I set up and had my lunch of granola bar and banana to regain some energy and relaxed for about 20 minutes. The hip had held out well so far, but downhills hadn’t been the issue before – going up was, and I had a good climb waiting for me.

I gathered up my things and headed back to the steel bridge. It had taken me 90 minutes to get to the falls – I figured it would be a further 2 hours to get back to my car due to a combination of fatigue on my legs and the ascent required going back. Once off the well groomed Shine Falls path and back onto my steep track, you could really tell I took the one less traveled by.

After a further 75 minutes, I had made it back to the trail branch. I was darn near exhausted, but still had 30 minutes of hiking along the loop trail to get to my car. I had figured it should be fairly simple. I was wrong, there were MORE climbs awaiting me. But, at the peak of one hill, I finally got a clearing from the dense forest I had been in for the last few hours and could see my surroundings.

Eventually, 4.5 hours after I had started, the trees looked familiar once again.