While I had driven to the peak of Te Mata a few days back, it just left me wanting to hike the darn thing, on a beautiful sunny day. Today was that day. After getting new brake pads on my car (just kind of necessary maintenance given the hills here), I headed south of Napier, back to Te Mata. This time I parked at the base car park and took a look at the map.

I won’t try to point out what exact route I did, but I did almost all 3 of the main trails (Peak, Te Mata, Nature) in their entirety. It’s hard to say exactly where though – the map was woefully inaccurate. Of all of the hikes I’ve done in NZ, this is the only time I’ve been truly confused as to where I was, on multiple occasions to boot. The routes were poorly signposted or were downright confusing in their directions along the way. And this place was the busiest hiking spot I’ve been – I probably walked by 20-30 people during my 3 hours hiking. Still, even with the poor directions I had a great time exploring and never was too concerned – the park wasn’t very big after all, I could always see civilization.

Anyways, on with the hike. I started at the bottom car park, which after 20 minutes led me to a small grove of Redwoods, which I wasn’t expecting to find here.

These were just young Redwoods though, and just a warm up – there had a much larger grove of more mature Redwoods a bit further on.

And just to get a sense of the scale:

For some reason, when I was in San Fransisco I didn’t visit Muir Woods – one of the best places to walk amongst the towering Redwoods. A shame I didn’t, now that I think about it, but oh well, this spot was great in its own right. Shortly after the Redwood grove, the track left the forest and quickly changed to alpine like travel. A few photos in a row now, until the summit.

After about an hour and a bit, I had reached the peak (and car-park) again. The view was even better than last time, and having hiked all the way up, felt well earned!

From here, I descended using another track, following similar spectacular vistas as before as I returned back to the tree line. Along the way, in this area, I was accosted by another Magpie. I’m really beginning to HATE these birds. I know they are just protecting their nest, but I have no interest in their nest, I just want to have a peaceful walk! This one only tried attacking me a few times, after several close calls it returned to its perch and simply watched me from afar. 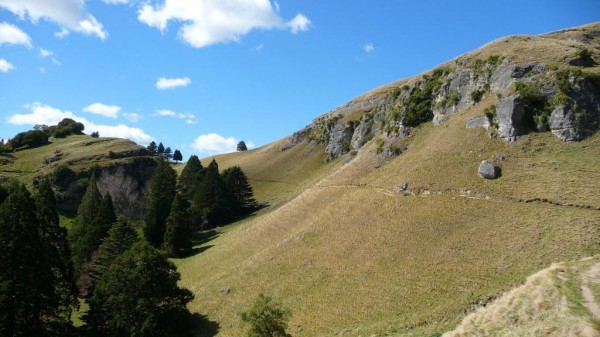 I made it back to my car after roughly 3 hours of solid hiking. Tired, I made just one stop on my way back to Napier. I wanted to size up my hike for tomorrow morning – a 5 hour hike in search of Boobies.