It took two tries, but I made it. White Island. I arrived in Whakatane under blue skies and looked out on calm seas and happily paid for my tour. 15 minutes later, I was on a boat headed out onto the ocean. It takes about 90 minutes to get to White Island which is about 50km away from the coast.

Given that White Island is very much an active marine volcano, I expected to see some dragons. Instead, we got to see a pair of humpback whales along the way. Still pretty neat! 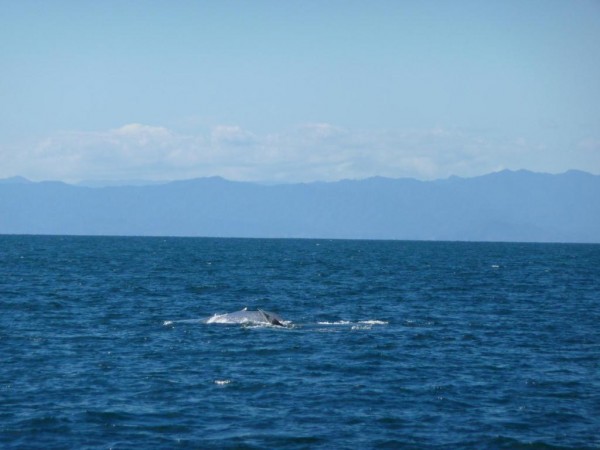 About 15 minutes before arriving at the Island we were given our required safety gear – gas mask and hard hat! You know the place means business when you have to wear a mask. Actually, the mask WAS optional (had to be carried, not necessarily worn), though highly suggested in parts when the sulphur got very strong.

Finally, we were at White Island. From the water and on land, the island doesn’t look that large – it’s only 2km in diameter and 320m above sea level at its highest. But it’s like an iceberg – the actual volcano rises 1600m from the bottom of the sea. In other words, it’s a pretty sizable volcano.

Instead of dragons, I kind of started thinking I might find some dinosaurs here. It really did look like an island featured in many pre-historic films or drawings. The continuous cloud above it, the imposing, dead features, all led to a good sense of foreboding. We had arrived at our landing bay, but since there aren’t any actual facilities on the island we had to transfer to a little inflatable in groups to step foot on the island. I was in the first group.

We were greeted by a great, desolate landscape, with the main steaming crater in the distance.

I’m standing in the area that a sulphur mining operation used to exist. Starting in the mid 1880s, mining operations began on the island in order to try and extract some of the sulphur found. This proved to be difficult! Not just because it wasn’t pure sulphur they were handling, but mostly because of the active nature of the island. The high amount of sulphur in the air destroys clothing, teeth and steel rather fast. Then of course there are the eruptions, earthquakes, landslides and other various disasters that happen with a volcano. The most famous during the sulphur mining time was in 1914, when an eruption/landslide killed all 10 workers on the island. There was just a single survivor – a cat that lived with the men, called Peter. He was rescued, taken back to the mainland, dubbed ‘Peter the Great’, and now many people in the region claim that their cat is a descendant.

Still, people were willing to work on the island for the sulpher production operations which resumed in 1923. The pay was double what they would get on the mainland and as long as there wasn’t an eruption, you didn’t step in the wrong place, the winds didn’t blow in the wrong direction, the earthquakes (of which there are many a day) didn’t bring a landslide down on top of you…well, it still doesn’t sound very good.

As we walked towards the main crater lake, we passed numerous signs of the abundant sulphur on the island, along with small pools of steam and bubbling areas.

The further we walked in, the more lunar-landscapish the area became. Noise and temperature was also increasing.

Would you continue walking? Really, it wasn’t scary at all, though you are constantly reminded when walking to STAY ON THE TRACK. Deviate by as much as a few meters at times and you might find yourself in a world of pain, or dead. There are lots of hidden pools, shallow hills and other dangerous areas just waiting for a goofy tourist. I played follow the leader and stuck with the group!

We had arrived near the main crater lake for a stop beside two VERY loud fumaroles pouring large amounts of steam and gases from deep in the earth.

Looking back towards the ocean, we had come probably about 750m-1km inland so far. We were nearly to our destination.

Now was time to don the gas mask. We were heading to the lip of the crater-lake. Sulphur was getting VERY strong by now, causing a lot of coughing for those not wearing a mask.

Slightly reassuring I suppose to see that others had made it back from the crater alive. Or at least some of them, who knows how many went in?

Near the edge of the crater-lake, concentrations of sulphur keep increasing and it becomes very noticeable on the nearby rocks as everything starts turning bright yellow. Kind of like yellow snow. You don’t eat yellow snow and you certainly don’t want to eat this stuff!

Finally we stood at the edge of the crater-lake, with the steam and gases running up the edge.

Looking down at the crater lake you can make out the distinct bright green liquid below.

HIGHLY acidic, it actually has a *negative* pH (-0.1). In other words, darn strong stuff and believed to be one of the most acidic lakes in the world. The thing with the lake – it’s dropping in height pretty rapidly. Not too many years ago (less than 10, can’t remember the exact time-frame), the lake actually came up to near the edge I was standing at. Now it was many meters lower and still dropping.  The scale is hard to tell from the pictures though, in person the area is large and mighty impressive. But to give you an idea, here is the reason this post took so long to get up – a panorama of the crater lake, which was created by stitching together 30 pictures.

Finally, walking back away from the crater, I got another (smaller) panorama of the area.

We walked back a different path, this time weaving amongst bubbling mud pools. A long ways back, one of the workers wandered off one evening. The next day only his boots were found near the edge of one of these pools and he was never found. This island is FULL of happy stories!

Along the way, our guide made an unexpected stop and picked up a large rock. Then he told us all to stand back, and slammed the rock onto the ground. The ground held up but rather than the normal ‘thud’ we heard the distinct hollow sound of the ground below us. There really wasn’t a ton of material separating us from falling through.

Then our guide showed us some of the samples of sulphur from the area. Now a days sulphur is no longer mined, though it still has lots of uses. The reason? Petroleum operations create TONS of sulphur as a byproduct (crude oil often has a decent amount of sulphur present), which then is sold. Often companies end up with surpluses, especially in sulphur rich crude operations – The oil sands of Ft. McMurray is one such place, where they have tons and tons of sulphur just sitting around waiting for someone to want them.

The last stop was to go through some of the old mining operation area. A lot of it highly corroded due to the environment.

They also had some Chemical Engineering technology! Shell and Tube Heat Exchanger! I don’t think this one would work well anymore.

This equipment was simply abandoned in the 1930s, the final time mining was attempted on the island.

After about 1.5-2 hours on the island, we said our goodbyes to the island.

The cost to visit White Island is high ($185NZD), and there is only one operator to get you there via boat (helicopter is the other option…at like $450/person!), but it really was a unique and outstanding experience. Truly a memorable place to visit and one of my highlights of New Zealand so far.

2 thoughts on “Journey to the White Island”