Going from Auckland to the Coromandel Peninsula normally doesn’t take too long – 1.5-2 hours depending on traffic getting out of Auckland. Since I have time to spare though, I took the more scenic route and camped at a couple spots along the way instead of heading straight there. The Auckland region (which extends north and south of Auckland city by…maybe 75km each way?) has over 20 district parks that are akin to provincial/national parks in Canada. In otherwords, quiet and peaceful areas with lots of activities to do.

I didn’t leave Auckland until the afternoon, so my first and last stop on my first day was Omana Park. It had an enjoyable camping area that somewhat overlooked the ocean.

The only problem was the weather – it spit rain and the wind was absolutely howling. My little grill barely made anything edible. My slice of beef was pretty rare. But since I’m still here, it must have been cooked enough. I went to sleep with dreams of e.coli.

The next morning the weather wasn’t much better, but I went for a walk around Omana Park. Nothing too exciting due to the weather, but the did have several pet goats and sheep, which amused me.

After that walk around, it was off to a place called ‘Duder Park’. No matter which way I said it in my head, the name just sounded stupid. I don’t CARE that it was named for the person that owned the land. But the scenery was very nice.

Then I ventured inland a little bit to the majestic Hunua Falls.

Ya, they set up large frames like that at the other parks too. But this was the only one that actually came out looking decent.

The neat thing with these falls (besides being a great place for me to eat lunch) was that you could walk around to the side and pretty much walk into the falls, if you so chose.

The weather was finally breaking, and once I got back to the coast the sun was out and the day was beautiful. I made a couple of rest stops along the way to stretch my legs and enjoy the warm sunshine.

Finally I had made it to Waharau Park, my camp for the evening. It was a lovely place – it even had hot showers for me, a bonus the other park lacked. I had a great meal (no wind this time) and hiked up into the nearby hills to look out at tomorrow’s objective – the peaks of the Coromandel Range. 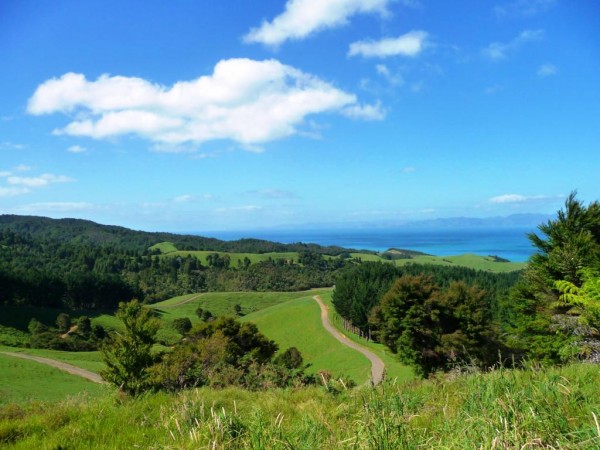