After leaving Te Anau, the next destination with Hung and Markus was the East Coast of the South Island. There was one very specific reason for this part of the trip – Penguins. Near Dunedin, we found a refuge that works to help preserve the rarest of all penguins (about the same rarity as the Galapagos Penguin), the Yellow Eyed Penguin.

To get to see the penguins, they reserve has designed trenches to take you close to the penguins. The penguins are wild, the reserve just provides a safe environment for them to come home to and breed, if the penguins so choose. The reserve has been successful and has quite a few families now. Well, quite a few for Yellow-eyed. Unlike other penguins, the yellow-eyed is decidedly an anti-social penguin, and dislikes living in large groups. They pair up and that’s it, no big groups of them here. Into the tunnels we went.

After a few minutes of walking, we came across a Yellow-eyed, and it’s young. It’s giant, fluffy, kind of dead looking young (no worries, it was alive, just resting).

There was also a pair of young Yellow-eyed out near one of the ponds, hiding from the mid-day warmth.

From there, we backtracked and took to the highlands above the beach area, where we spotted another yellow-eyed penguin resting.

Then a fur seal wandered onto the beach, and the penguin took notice.

The beach itself was quite splendid.

There were several fur-seals lounging around near the track.

Nearby, there were some Little Blue Penguins resting. They are found all over New Zealand, though the most famous spot to find them is in Oamaru, which we’d be staying at next.

Then we got introduced to another bird. Seagulls!

The unique thing here, was there was something I had never seen before. I thought all seagulls came out large, noisy, stupid and annoying. Turns out they start out small, cute, fluffy, noisy and annoying.

There were some adolescent seagulls around too.

And a whole lot of larger, annoying seagulls. Then we stumbled upon an adolescent (17 months I think the guide said?) yellow-eyed penguin. It was wandering around a farm field. 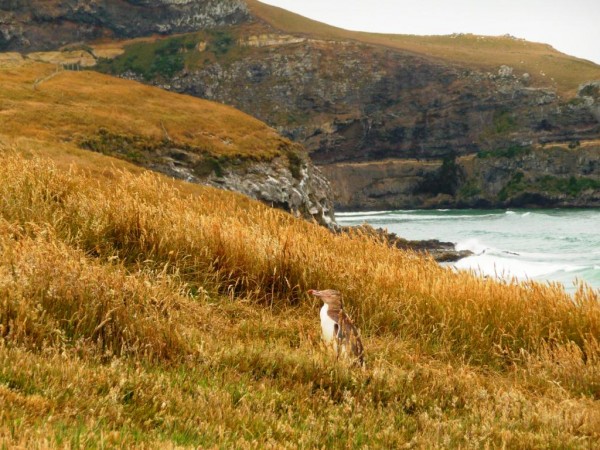 There was also a full-grown Yellow-eyed penguin hanging around. All-in-all, it was a really great spot to see some very rare wildlife.

From there, we headed north along the coast towards Oamaru. Along the way, there was one notable stop – the Moeraki Boulders.

These strange boulders are fairly spherical and lying at the shoreline in a fairly small cluster.

Some of the boulders had broken open. They have a bizarre honeycomb-like structure. Picture a Lindt chocolate ball, with a hard outside and soft, tasty chocolate inside. That is kind of how the boulders are – their insides are remarkably empty.

And a few final shots of these unique geological formations.

From there, it was onwards to Oamaru and it’s numerous penguins. It is quite a different experience than the reserve. This was about as close as you get to see these Yellow-eyed (on a 10x zoom camera).

The beach was quite nice though.

From there, Hung and Markus went to watch the Little Blue penguins come ashore at night time to sleep – it was a paid activity and did’t allow photos, and I’d already seen lots of penguins so I wandered elsewhere in town.

When night fell, it turned out the Little Blue Penguins came ashore everywhere. I saw probably 15-20 or so penguins near the tour area, waiting for Hung and Markus to come out. They are really cute little penguins, and love moving in packs.

So amusing. After Oamaru, it was off to our last stop together – the quake-stricken city of Christchurch.

One thought on “Of Penguins and Boulders”