When comparing landscapes between the North and South Islands, there really isn’t much in common. Where the North Island is dominated by lovely rolling hills, small mountains and the stark contrast of volcanos in the middle, the South Island has severe, sharp, granite coloured mountain peaks and massive, flat, glacier carved valleys. I found myself on a hike at one such gorge, called the Rakaia Gorge.

Fishing is quite common on the river, I saw several people down there when I finished my hike.

You quickly get up on the gorge during the hike, allowing you to see just how startlingly milky-blue the water is.

Last look towards the bridge area.

Mt. Hutt dominates the views near the gorge. It’s a popular skiing spot, being just 1 hour or so from Christchurch.

Near the far point of the hut there are some eerie mining ruins.

Where I had my lunch. Not a shabby spot.

I disturbed a lone Canada Goose, who made noise without fail for a good 5 minutes straight. I have a deep dislike for the obnoxious birds. They are considered pests here.

Back up onto the gorge cliffs, from the lookout spot at the far end of the track.

At this point, you start looping back towards the start, and you get to cross golden fields of grass along the way. 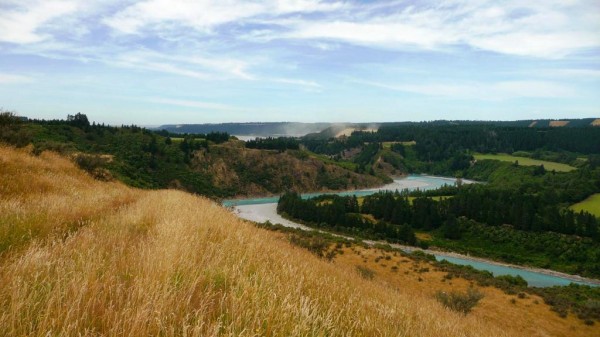 Another look at Mt. Hutt and the braided river below.

Finally, back at the bridges area. This was the hottest day I’ve had here in New Zealand – it hit 32C where I was! That’s hot for New Zealand (and me!).

One thought on “Glacial Carvings”