This was a little bit of an unexpected detour on my part. Prior to hiking around Mt. Cook, Hanna had mentioned the Greenstone-Caples circuit track, a 4 day, 60km valley and mountain-pass trek, in the same area as the famous Routeburn Great Walk (which I’ll be hiking in just 2 weeks from today). Many people actually complete the Routeburn and then use the Greenstone track to get back on the Queenstown side of the mountain ranges you are hiking across. But the Greenstone-Caples track is a more complete circuit, and far less expensive. The Greenstone was one I had wanted to see but had written off as a track I’d miss due to time/other hikes. The option of having an excellent hiking partner for the 4 day tramp changed my mind. And so after waiting out bad weather in Queenstown for 2 nights, I found myself at the start of the Greenstone-Caples track.

You can walk the track in either direction. Hanna and I opted for the Greenstone first, returning on the Caples track. This way, the hardest day, crossing the McKellar Saddle, would be the third day, and our packs lighter than if we took the Caples track first, which would have us crossing the saddle the 2nd day instead. This turned out to be a very good choice for a number of reasons. For much of the first, short day on our way to the Greenstone Hut, we walked amongst forest scenery.

But there were stretches, such as here where the Greenstone and Caples tracks went their separate ways (this is looking up the Caples Valley) when the trees would be left behind and we’d cross lovely, flat glacial valleys.

There were also some great peaks in attendance. 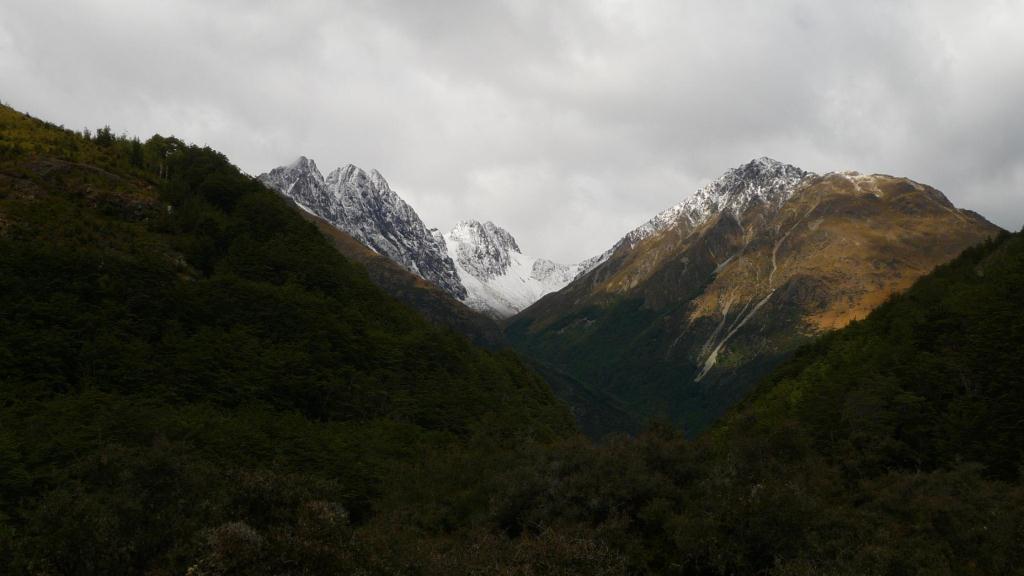 Many of the peaks had gotten a fresh dusting of snow due to the storm yesterday. It gave everything an even more scenic touch. The snow wouldn’t stay more than a day however, so I enjoyed it while it lasted.

There were quite a few avalanche/rock fall areas that you crossed.

Due to all the rain yesterday, waterfalls were in abundance.

It wasn’t until near the end of the first day that the scenery began to open up.

Looking down the Greenstone River.

And the view from the Hut. This was actually the most scenic spot of the entire first day. A bit of a disappointment in that the walk was all treed-in so far, but the view here was splendid. This was my first time bringing my tent with me, so I was out camping near the hut. The hut inside was a warm and friendly atmosphere, with Hanna, myself and 8 or so other trampers relaxing the evening away inside.

The next morning brought some New Zealand wildlife onto the track.

And unfortunately, grey and damp surroundings.

The clouds were unfortunate, as the trees were finally left behind and we would be hiking in mostly open valleys for the majority of the 18km to the McKellar Hut.

Even with the grey colouring, high winds and occassional spitting rain, we continued northward and upward. An hour or two into the hike, a young German named Felix, whom I had met yesterday at the hut, caught up to Hanna and I, and the 3 of us hiked the rest of the day together.

The ascent for today was very gradual. Over 18km you barely have any real hills.

Even with the flat terrain, the going wasn’t as fast as normal, as the ground in places was quite soggy. Rests were also frequent as there was no rush to get to the next hut. With daylight hours until 9pm still, a person can have over 12 hours of hiking time if they get an early start.

Looking back down the Greenstone Valley.

And up towards the McKellar Hut.

Near the end of the 2nd day’s hike, we re-entered forested area, but this was significantly greener and fuzzier. The forest was far more interesting this time. It also was the first occurrence of significant hiking on this trail that took place over tree roots. This would become even more prominent on the Caples side.

By the time we got to the McKellar Hut, the clouds had started to obscure most of the hills completely and the rain was picking up. An hour or two later, the rains came more steadily.

With the gloomy, grey surroundings, I set up my tent under the shelter of trees and fell asleep to the ruffling of wind and the pitter-patter of rain on my tent. The forecast for the next day wasn’t available, but falling asleep I had the distinct feeling that the rain was here to stay.