Thankfully, my anticipation of extended rain was WRONG. I awoke to wonderful sunshine.

Which was a good thing. This was the day we were hiking across the McKellar Saddle – the highest point of the track, and also the day with far and away the most significant ascent and descent. The saddle, which would end up being way up on the left hand side of the next picture.

But the climb up wasn’t half as bad as expected. The Department of Conservation here has spend $500,000NZD over the last few months upgrading the track significantly in this section, changing it from a dreadful, near mountain climb, to a fairly easy track full of switchbacks. To give you an idea, the ascent from valley to saddle now is 2.4km of track – the same ascent was accomplished over just 500 meters of track before. So MUCH easier gradient now. The views towards the top were great. I loved the sharp mountain peak that appeared to be billowing clouds.

And finally, cresting the rise of the saddle to walk beneath a mammoth peak. 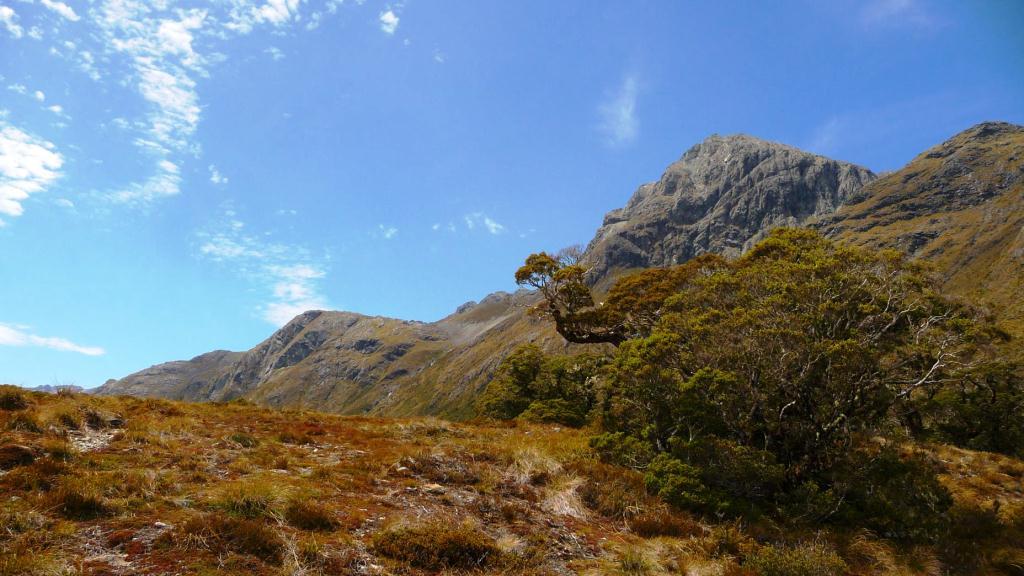 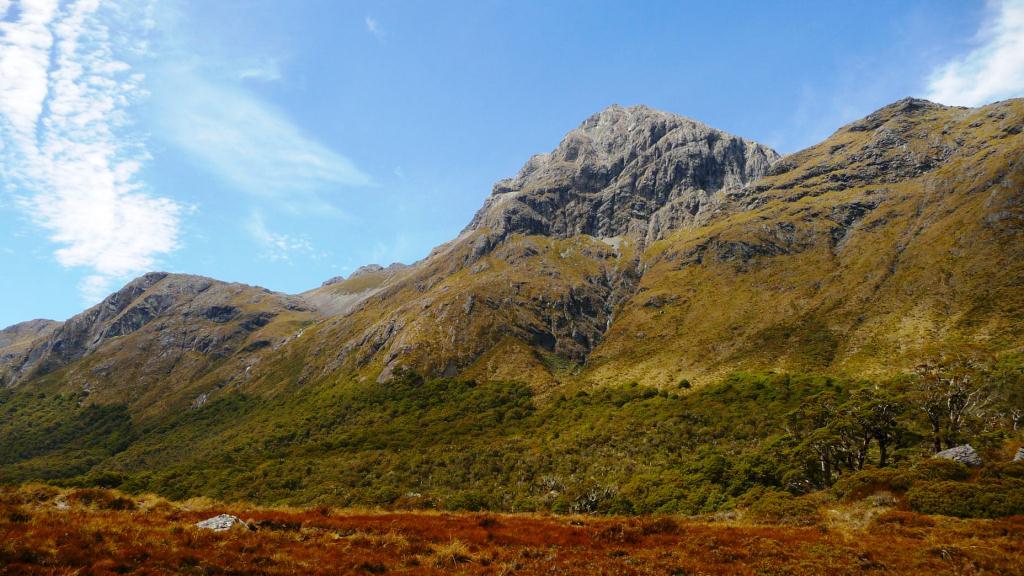 Proof! And also a good spot to relax and have lunch. 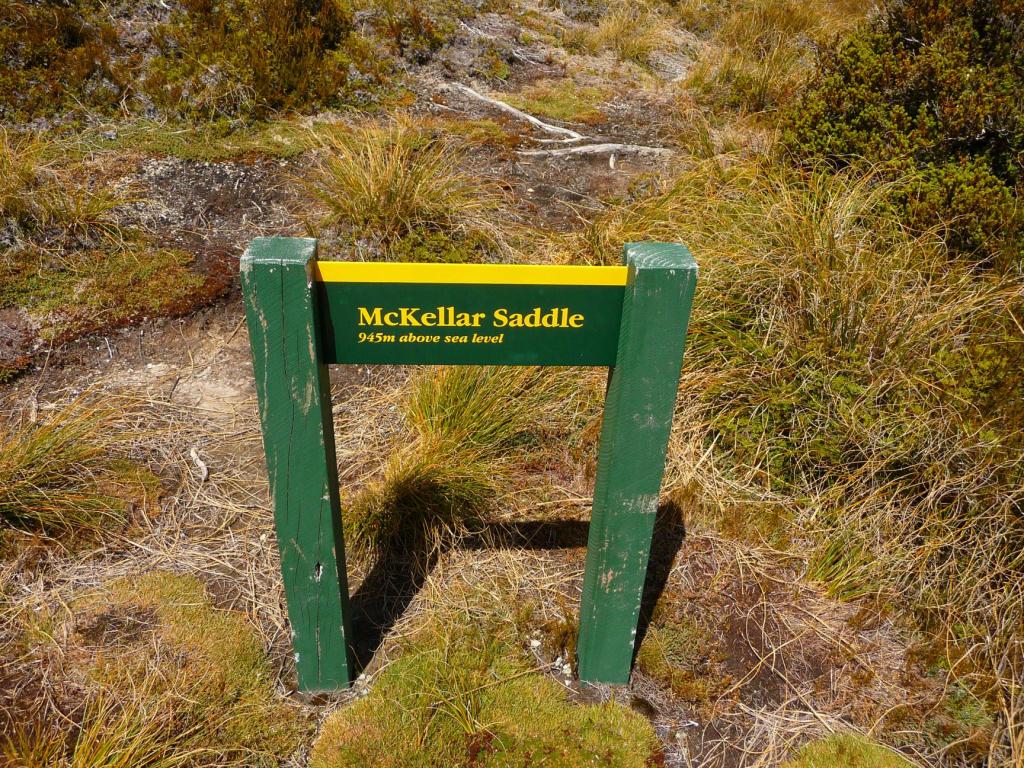 The walk along the saddle still brought changing scenery. After a bit, the peaks in the distance came into view.

So did a big, long waterfall down the side of the nearby mountain.

And even a tarn!

I was SO glad that the weather was good this day, of all of them. It was easily the highlight day.

Some of the peaks looked like massive, sloped pieces of rock on their sides. 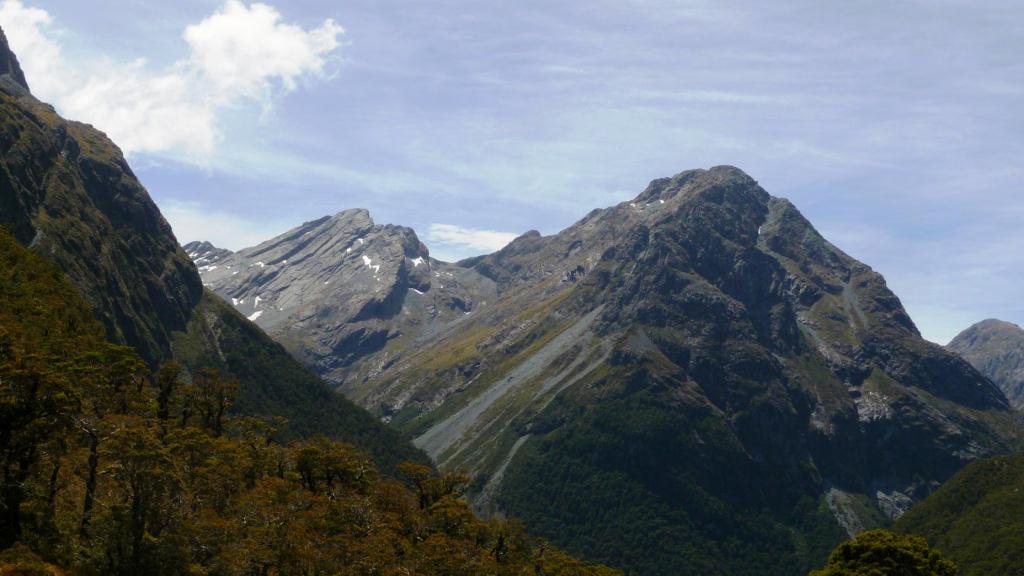 And then the descent on the Caples track began. A VERY different experience than the easy climb up, the Caples track is in the midst of getting its own upgrade. But the old track is the one still in use for the moment. It was a bit of a scramble, over hundreds and hundreds of tree roots, before descending into a lush, mossy green forest, which followed the start of the Caples river.

Even after the stellar vistas given by crossing the saddle, this was a verdant forest to walk along, and a great change to the other side. The track was challenging and tricky in spots, but it also had a ton of character. I heard others describe the newly upgraded Greenstone ascent as a 4×4 track or a highway. I can understand the sentiment after seeing how the old track was. 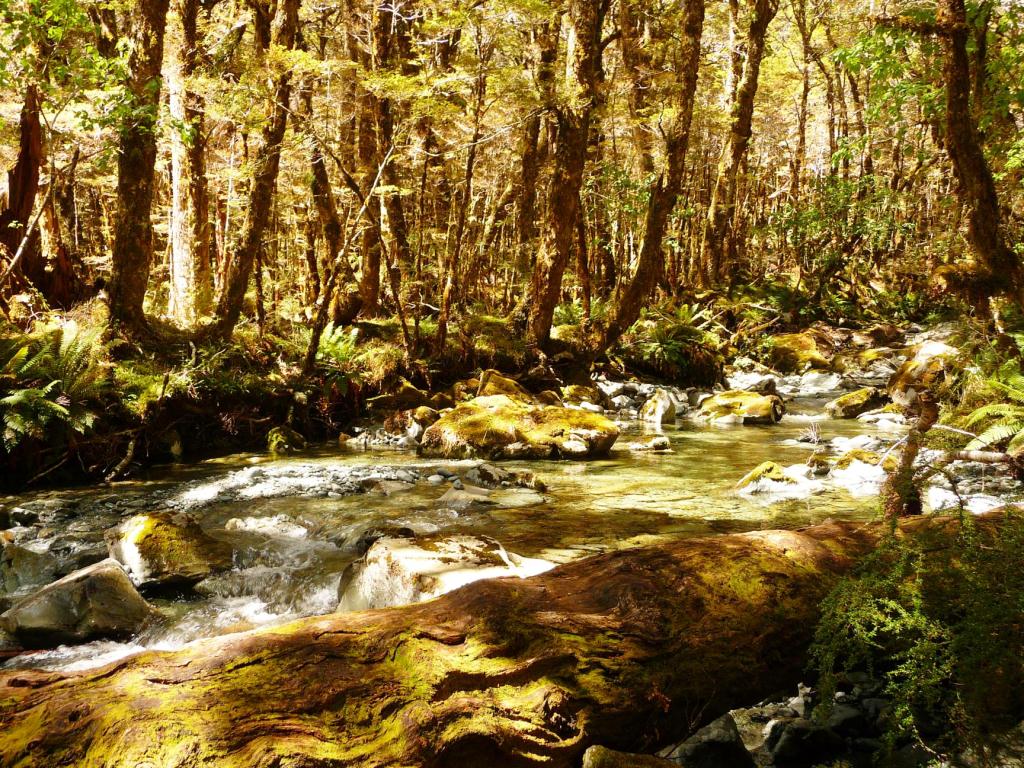 Hanna mentioned at one point that the forest felt like something out of Tolkien. I agreed.

And then we came to a door. Isn’t this how fantasy books sometimes start, with a strange door in the middle of a beautiful forest?! There was absolutely nothing here for the door to belong to. We were still a few hours away from the next hut. It was very bizarre.

Despite trying to open a door without a frame, and failing to find any mystical lands hidden behind, we eventually popped out into the Caples valley to the late-day sun. 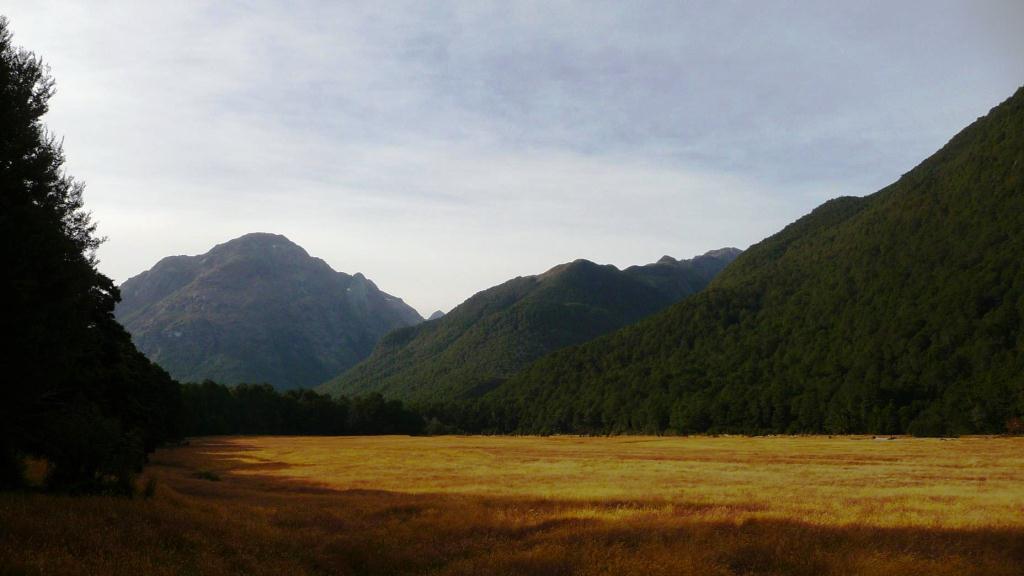 While we reached the Upper Caples Hut in good time, around 5pm, both Hanna and I wanted to make the most of the good weather, so we pressed on in the direction of the next hut, 2 hours further.

It was an enjoyable and easy walk through mostly open valley floors again.

The pyramid peak on the right hand side would be the ultimate end destination the next day – at the bottom of that peak, the Caples and Greenstone rivers meet, and the circuit would be complete.

We didn’t quite make it to the next hut, but decided to camp here, off the track. On the Greenstone-Caples tracks, you are allowed to camp 50 meters off the track, by the bushline (just off to the right in this picture), for free. Neither of us had planned to do so, but this was a lovely spot and we had been walking for quite a few hours by now.

While the scenery and ground made for great camping, the bloody sandflies most certainly did not. The instant I started setting up my tent, they attacked. In swarms. It was the worst I’ve seen them in New Zealand so far. I came away with about 15 bites. But once all that snuck into my tent were dead, I slept well that night.

And awoke once again to a beautiful morning.

The early morning clouds didn’t last long. By the time we had hiked the last 20 minutes to the next hut, the skies were clear.

Another stellar day for hiking, which would be our 4th and final day on the track.

Even the winds were calm, giving good reflections.

The Caples river continued to flow along side the track.

Here, a falcon had just chased, and caught, a smaller bird. It was quite something to watch. 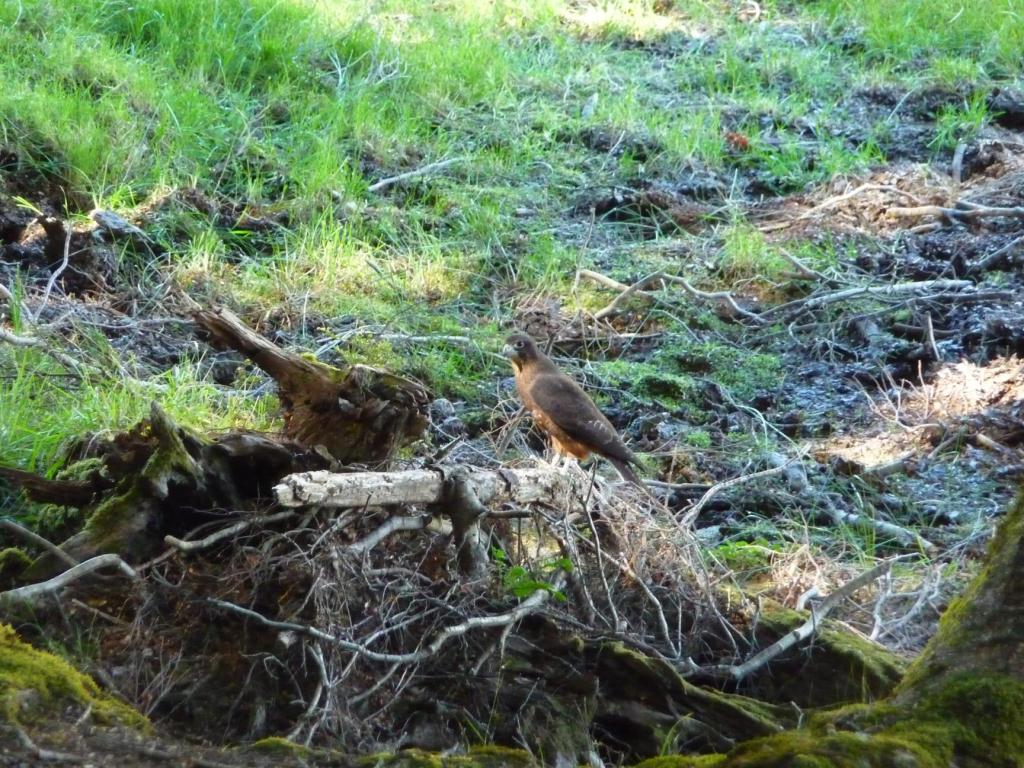 While the last few hours of hiking was mostly in the trees once again, there were bits of farmland to cross as well.

Looking back up the Caples valley. 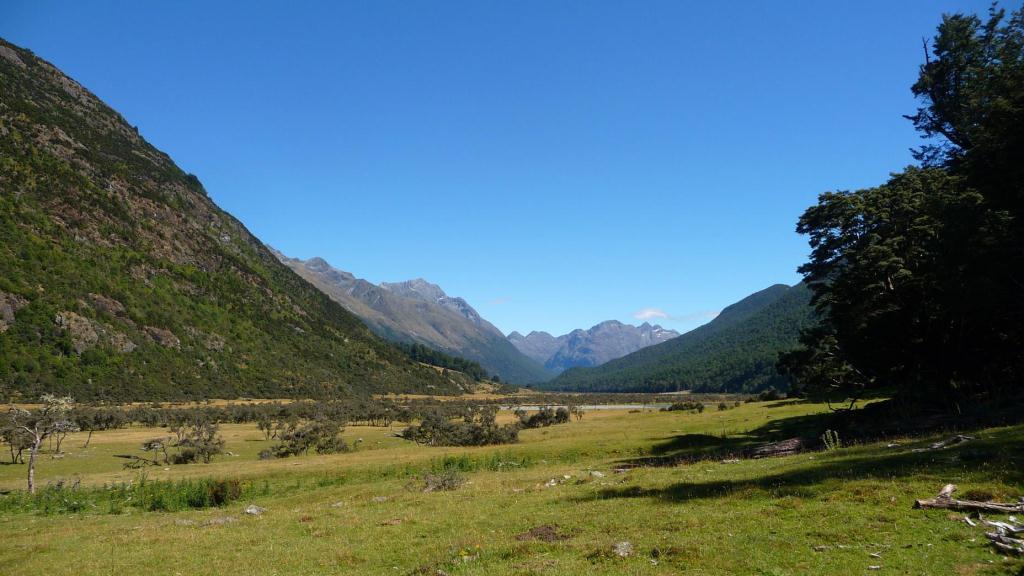 And towards the area where the Greenstone and Caples converge.

4 days, 60km of hiking, and we were finished. It was a very enjoyable hike, both having a very enjoyable track with changing scenery and a wonderful hiking partner in Hanna. The Greenstone-Caples might not be quite a Great Walk, but it was still a very good one!

Afterwards, nearby, there is Paradise. You just can’t leave apparently.

I also couldn’t actually find the spot. But Diamond Lake (which is very close on the map at least), was very nice.