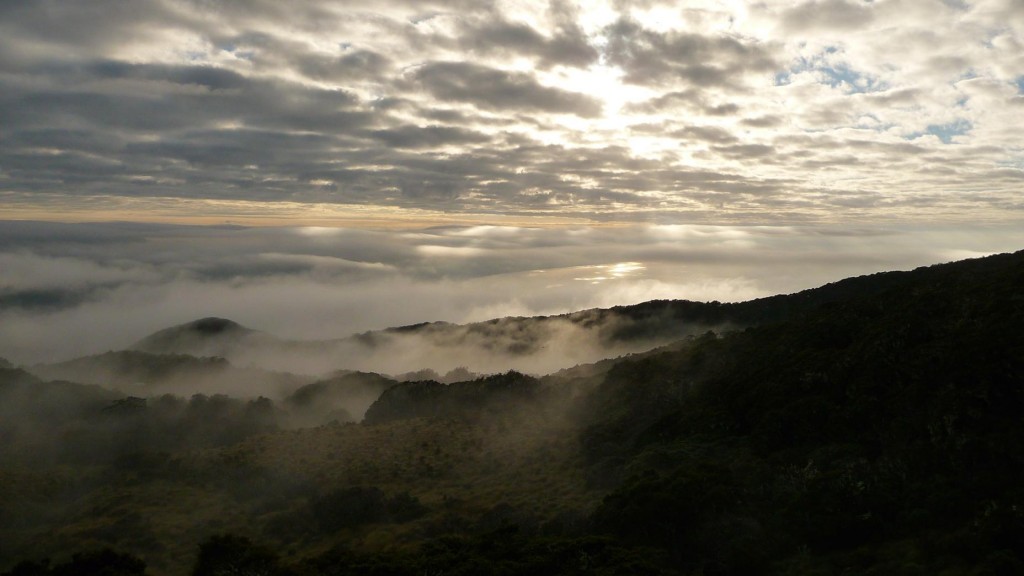 With the morning cloud quickly burning off, I returned towards the top part of the Hump Ridge track.

Looking back down towards the lodge, and the ocean far below.

There were tarns! Fun for all ages.

And some really cool rock formations. Just sticking out. At the top of a mountain.

Some of the boulders were massive.

And they had their own tarns too!

The stellar view from the top of the track (the peak is a bit higher and out of the picture, but protected ground).

Looking back from the view point.

I wasn’t the only one up here.

Another look at some of the first major boulders before I continued the loop track around the ridge.

The pictures are a pretty good representation, but truly, this spot was stunning. Just phenomenal views and scenery.

Around to the back side of the ridge now, still with the very long morning shadows.

One last look back, before I returned to the Lodge for breakfast and to pack up – I had another 18 kilometers to hike, and a 900 meter descent!

After finishing everything and setting out, I made another detour to the top loop track. The scenery had changed substantially in that one hour. I (and the 3 other people that were up there with me earlier) were very lucky. The cloud didn’t clear for the rest of the day, from what I could see.

And so I headed downwards, back into the forest as the trail followed the Hump Ridge.

Eventually I got below and out of the clouds. Finally, a wonderful, sunny, warm day! It seems a rarity when hiking in New Zealand sometimes! 🙂

While it is a pretty well groomed track, there are still some tricky spots. 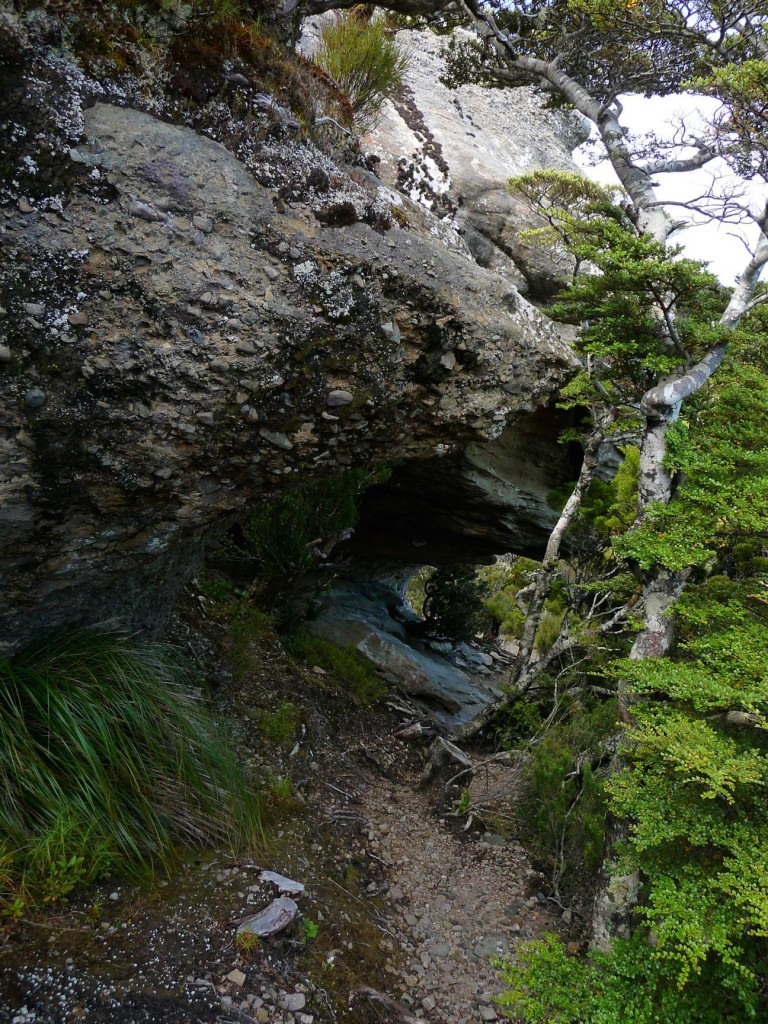 After finishing my 900m descent (over quite a few kilometers), I found myself at the first of 3 viaducts. This was the Edwin Burn Viaduct.

I also spotted a rather large set of eyes watching me as I crossed the viaduct.

The rest of the track today would be rather flat and easy – it was an old rail track.

Quite a few tiles were still in the ground.

Finally, the other highlight for the second day, the Percy Burn Viaduct.

Considered the largest surviving wooden viaduct in the world, it was remarkably high to cross. I also found it fairly funny that it was built using Australian lumber. 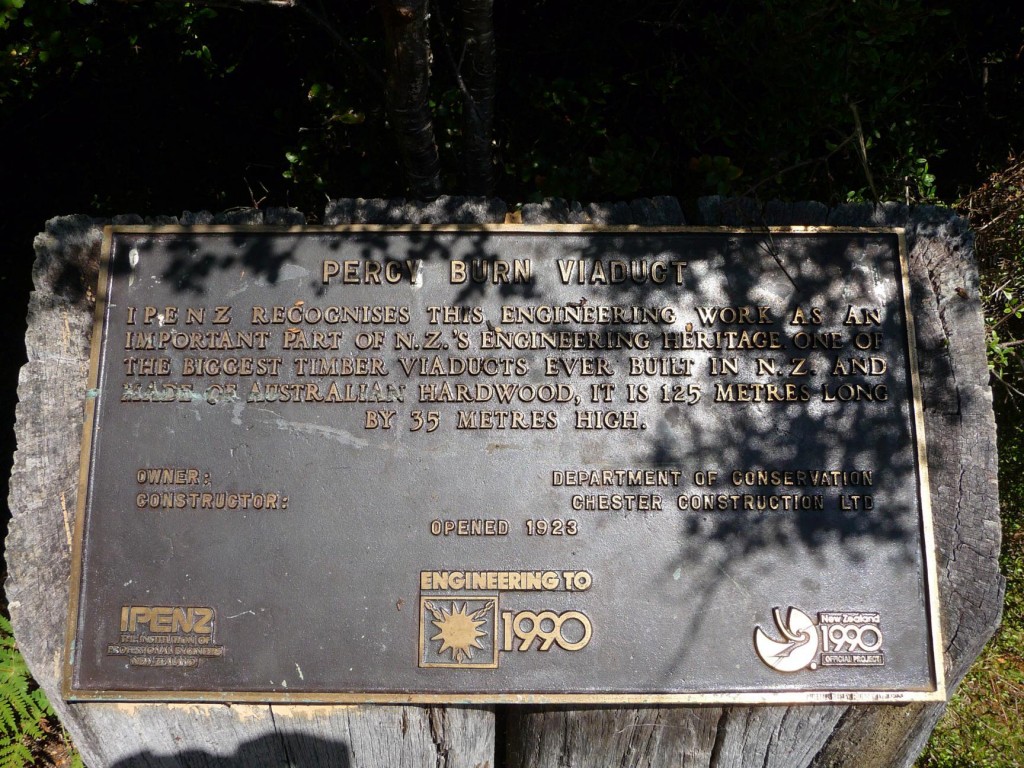 The final stretch to the Port Craig lodge.

I had made it to the lodge at Port Craig. Always with a sense of humour, this was the helipad.

A short walk to the beach brought me some good waves. And Hector’s Dolphins! A pod of 3 dolphins were out in the waves. I couldn’t get any good pictures of them, but it was very cool to see. The Hector’s Dolphin is the smallest dolphin in the world, and only found in New Zealand (and are relatively rare here).

Enjoying my thai curry and rice dinner, and another beer.

The sun rises on my third and final day on the Hump Ridge Track. 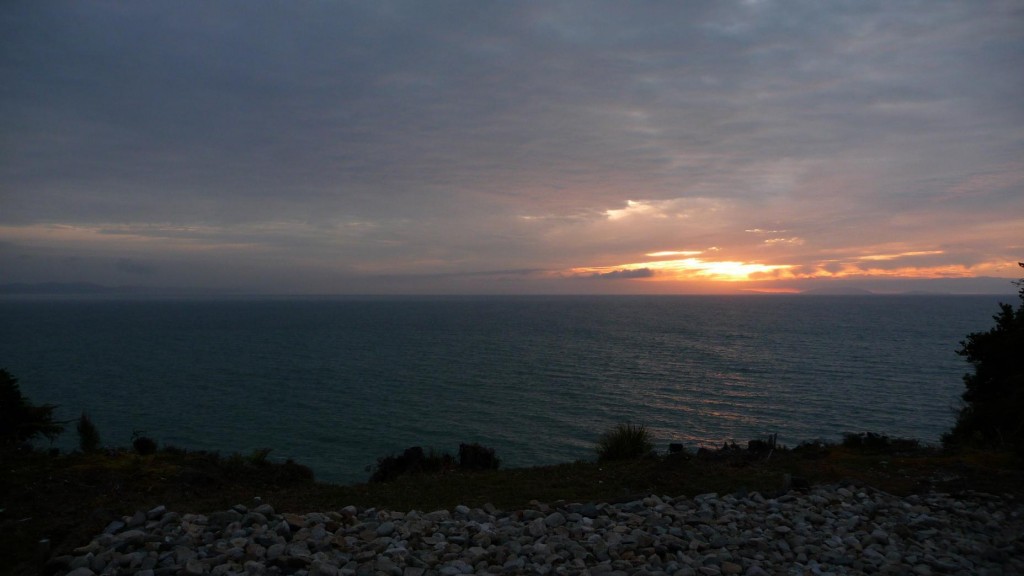 There was even a cameo by a helicopter!

After that excitement, I set off on the last stretch, a relatively flat 18km.

And thankfully, more time on the beach!

It wasn’t a great weather day yet again, but I was just about finished.

And thus ended my time on a private walk. Many who have done it considered comparable to a Great Walk. I’d agree – of the walks I’ve done so far, this surpasses the Lake Waikaremoana and Stewart Island hikes in terms of pure scenery and variety. Each day was very different and scenic in it’s own right. The major knock against it would be the price – at $130 for 3 days/2nights, it’s a bit more expensive per night than other Great Walks, which at the high end cost $50/night to stay in huts (only $15/night or less for camping). So that probably deters a lot of backpackers from attempting it. Which is a shame – the scenery is first rate, and you DO get quite a bit more for your money. A much better bed, considerably better lodge condition (and Great Walk huts are usually very good to start!), cooking supplies, hot porridge in the morning (was very tasty), very comfortable seating, the list goes on. I enjoyed that it was a privately run track – the place was nearly empty. With only 3 others hiking at the same time as I, in a place built for 40, there was finally the sense of remoteness I had been craving on the South Island. Granted, it isn’t what the town of Tuatapere wants, they’d much rather have full lodges each night, but for my purpose, it was wonderful.

Perception and reality were also a bit different. Many other backpackers had heard about the Hump Ridge track. They had unfairly written it off as a ‘rich-person’s/elderly accessible track’, not a challenge at all, since it was private and for-profit, and that it would be a cakewalk that anyone could do. The reality was, this was one of the most challenging multi-day walks I’ve done so far. At 55km in length, it is a considerably longer hike than most great walks. And then there is the 900+ meter ascent, which is also a larger climb that one would see on most Great Walks. All in all, a very good challenge. Yes, others can take helicopter rides to each lodge instead. But I imagine that is the small minority. I do hope the track continues to gather good word of mouth – it’s a wonderful time and well worth rewarding the community that spent 12 years building it into something to be very proud of.