After the Routeburn and Milford Sound, the trio and I stayed in Te Anau for the night. After that the other 3 went on a glow worm tour before we returned to Queenstown for another stop, once again midst pouring rain. We left Queenstown the next morning, still under the cover of rain and headed to Twizel, where Marc and Lexie enjoyed a Lord of the Rings Tour, while Sabrina and I wandered through the Clay Cliffs I had explored a while back (detailed here). Then, it was time to head to Mount Cook.

While Twizel had pretty good weather, Mt. Cook saw us return to rain and cold. Which was unfortunate, since the next morning we were going kayaking. And not just kayaking on any lake, but Tasman Lake, a lake that has the Tasman Glacier face at the far end of it – and numerous ice bergs floating in the lake. Kayaking amongst dozens of huge pieces of glacial ice? Sounds pretty cool.

Didn’t happen. The morning of kayaking had terrible weather – high winds and heavy rain. With kayaking a bust, we decided to try the other option for the lake, which is to get out and touch the ice via speed boats.

We got out to the lake (a 20-30 minute hike, after a 15 minute bus ride)…only to have that tour cancelled on us. We were soaked, and dejected.

Well, not entirely dejected after finding a piece of glacial ice to play with.

But either way, disappointing to all involved. We had a few options and a bit of flexibility in our schedule the next day, so we re-booked on the early boat tour (the kayaking left too late). And hoped beyond hope that the forecast for better weather came true. We spent the afternoon mostly indoors, hiding from the weather, before doing the Hooker Valley walk in the evening, when the rain had finally let up.

The next morning? PERFECT.

We were on the boat and happy as could be.

Sidling up to a *small* piece of glacier ice.

When I was last at Mt. Cook, the Tasman Lake only had a few pieces of ice floating around. I was a bit concerned, as that didn’t seem to interesting to get out on the lake for. A few weeks later, a massive ice fall of the Tasman Glacier pushed an estimated 20 million tonnes of ice into the lake. You can start to get a feel for the scale of things with this picture – there is another boat on the far left side. These pieces of ice are far larger than houses, and often stand many meters above the water. And of course, there is the old adage that you can only see the tip of the ice berg – considerably more ice is hidden below the water than you can see in the pictures… 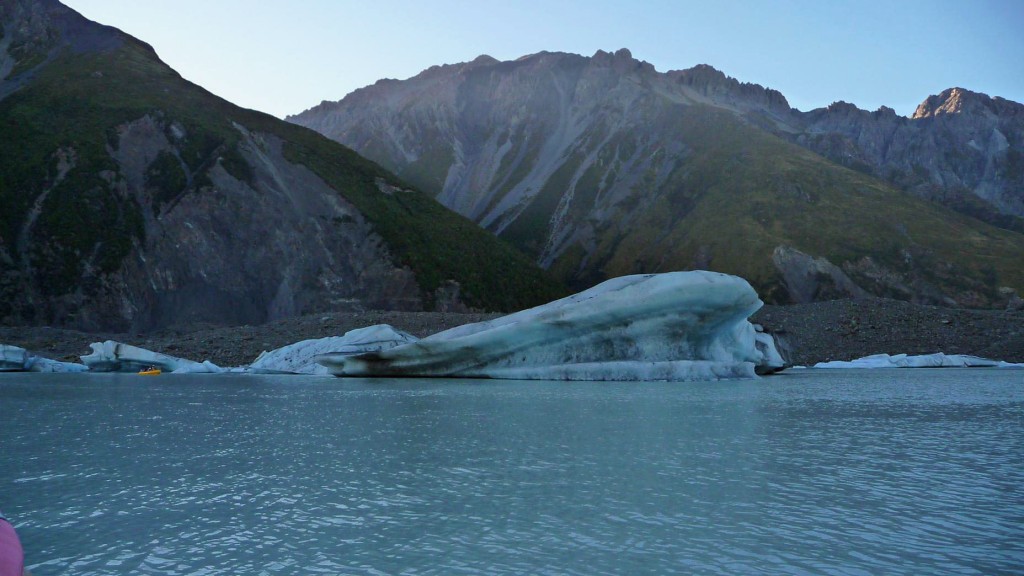 There is a lot of smaller pieces in the lake, just waiting for someone like me to pick them out…and start chewing on.

Then we came to the big one. This was a MASSIVE piece that fell off in the last month, and simply dwarfed everything.

It was a stellar thing to see up close.

From that giant piece of ice, we sped towards it’s point of origin – the Tasman Glacier. We couldn’t get any closer than this – the glacier loses ice too often, and too randomly, making it a considerable danger to small boats.

One last look as we speed back to the dock.

After that great success of a tour, we were dropped back at the Hermitage, for a final wonderful view of Mt. Cook and Mt. Sefton, before leaving the village.

A final goodbye to me for Mt. Cook, looking at it from across Lake Pukaki. Simply beautiful. One of my favourite places in the South Island.

From there, we would be heading to Christchurch…but taking a few hours detour along the way…