Everyone has those kinds of days where everything just seems to go right. It usually isn’t planned to be a great day, but somehow, everything comes up roses and you are left with a feeling when the sun sets that you had an unexpectedly FANTASTIC time. This was one of those days for me.

It all began simply enough. I had met a fellow Canadian traveler named Becky the day prior and we had discussed hiking the Kepler Great Walk in a couple of weeks (as I had the Milford coming up first), and also checking out the Wanaka A&P (Agricultural and Pastoral) show the next day. The A&P show in Wanaka is a big deal, and even costs an entry fee of $10. Still, it’s like a big carnival. With absolutely ridiculously themed slides:

Who WOULDN’T want to replay their favourite scene from Titanic, of the guy falling while the ship sinks? I couldn’t believe they made this kind of slide. It was just the tip of the iceberg for my day.

Much like other country fairs, this one featured horse jumping. I tired of it quickly though, not really my thing.

From there, I stumbled upon something called ‘The Glammies’. This is where New Zealand announces the ‘best tasting Lamb’ in New Zealand for 2012. So, kind of a big deal here, where lamb is king! They even get some big names to be the taste testers.

Most notably, the Prime Minister of New Zealand himself, John Key. 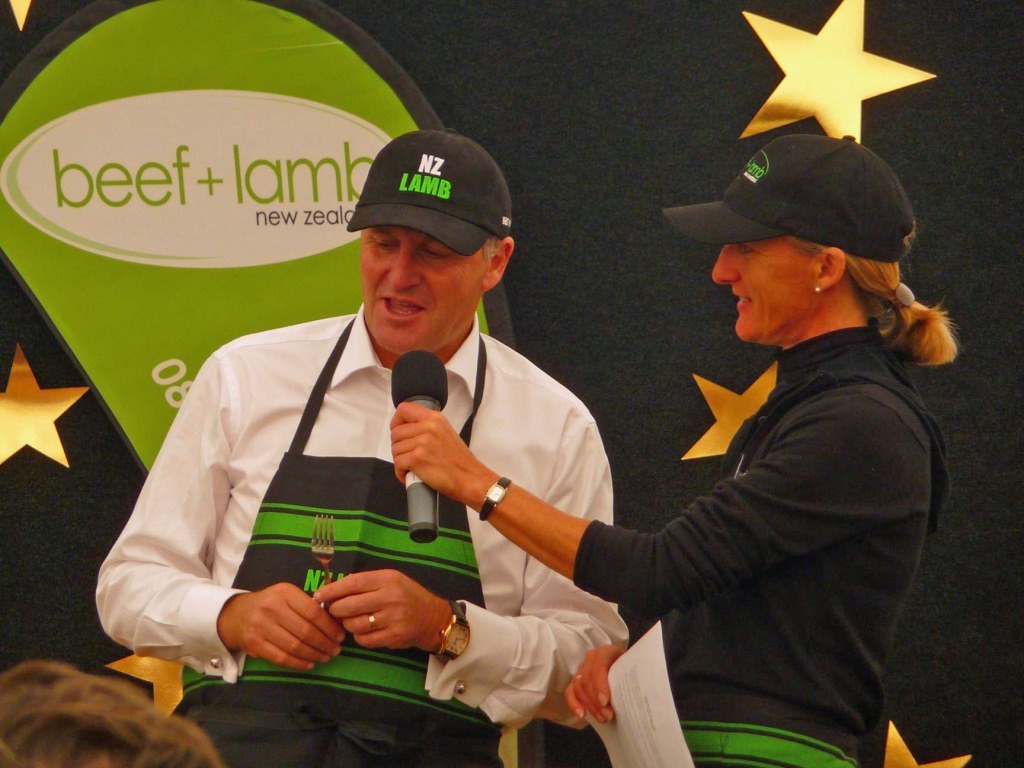 After watching them try 20 different samples of lamb, and sampling some myself (free food!), I wandered up to Mr. Key and had a quick chat, and requested a photo. I loved that there was no security, no lines or anything, you can just go up and say hello to the leader of a country. Such a unique place at times, New Zealand.

From there, I met up with Becky to wander the fair some more. I came upon this oddity at at coffee stall.

I don’t know what they are selling to be exact, but I want nothing to do with it!

By 2pm I had to leave Wanaka and head to Queenstown – the weather was fantastic so I had made an appointment for something I’ve been waiting quite a while for. I took the ‘short-cut’ of the Crown Range road, which is only ~60km (instead of 110km), but is an extremely curvy road. It also is one of the highest altitude roads in New Zealand that is paved, at over 1100m at it’s high point, and gives great views on a clear day.

Paragliding! Yes, I finally got up to Para-glide near Queenstown. It took about 6 tries before the weather finally cooperated enough that I could fly above the hillsides. It was fantastic.

Not so much an adrenaline activity as a relaxing one, after a quick run you are off and soaring, coasting above the tree-tops. And because you are in a sitting position, it’s very relaxing.

The ride takes about 15 minutes, during which I got the opportunity to control the glider a little, but more importantly just enjoy the passing scenery. Fantastic!

After all of that, I had worked up quite an appetite. And when you are in Queenstown, there really is only one option for awesome food: Fergburger. Sure, there are plenty of nice restaurants in the city, but for sheer joy of eating, Fergburger is what you want.

Starting at $10, you get a massive burger with tasty ingredients, more than enough to sate most people’s appetite. My favourite so far is the Tropical Swine burger – adding pineapple, bacon and cheese to the basic burger. But I haven’t had a bad one yet, they all are pretty outstanding.

After all that, my day still wasn’t quite finished – I left Queenstown behind and headed to Te Anau for the night. Because how does one try to top a day like that? They step onto the Milford Track.