“The Finest Walk In The World”

That’s a mighty big proclamation to make. Even in a country known for great hiking. The Milford Track has a lot to live up to, not just that quote, which gets bandied about quite a bit in regards to the Milford, but also from general word of mouth that places it as an outstanding 4 days.

When I had made my booking for the Milford Track back in November, I had yet to set foot on any hike longer than a day. 4 months later, I had tackled 4 Great Walks and 3 other multi-day hikes. But none had the reputation the Milford has, not even the fantastic Routeburn and Tongariro Circuit walks. I really didn’t think the Milford could beat my favourite hike, the Tongariro Circuit, and most people had considered the Routeburn superior than the Milford (and in it’s own right, one of the best hikes in the world). I really didn’t see HOW the Milford could even approach it’s reputation, as the negatives to the hike hit on a few major issues I have with hiking in New Zealand:

And so, on March 13th, 2012, I found myself on a boat heading to Glade Wharf, with a sense of trepidation and doubt. I just couldn’t see how this track could live up remotely to what it had been built up to. There were just too many things stacking up against the Milford in my mind, and the forecast wasn’t promising either. The first day was to be great, 2nd day deteriorating and the 3rd day, the longest hiking day involving the highest section of track…heavy (severe) rain. Yuck.

But for the time being, there wasn’t a cloud in the sky as we crossed Lake Te Anau. It was a beautiful day to start hiking.

The boat ride itself is quite the venture, taking over an hour to get you to the edge of Lake Te Anau.

And thus begins the Milford Track.

For much of the first day, the track is more equivalent to a small road. While numbers are limited for the entire Milford Track to 40 people in huts, and 50 people in extremely expensive lodges ($1850 for the 4 day  hike!), anyone can take the boat and do a day walk on the Milford. You won’t get very far, but at least you can say you’ve been on the Milford Track!

Right away, you notice just how wet the area must be to support such dense moss everywhere.

Glade House, which is the first night stop for those on the expensive guided hike. A pretty brutal first day, this stop is all of 1km from the dock. Those staying at the DOC huts had quite a bit further still to trek…okay, not much further, all of 4km more or so.

The view from the front deck of the Glade House was very pleasant, especially on a stellar day like today.

The first, and largest, suspension bridge on the Milford. We cross the Clinton river here.

Looking back at Glade House. Te Anau is that way as well, just a considerable distance now.

Back amongst the foliage and greenery. I was really enjoying the forest walk so far.

Finally, mileage markers! This is one thing I wish more Great Walks / hikes would have. I love knowing how much further to go, how my progress for the day is going, etc. Interestingly, the Milford uses miles as the main unit of measure, despite New Zealand using SI units. I imagine it must be a holdover from when the track was first used to guide people to the Milford Sound – over 100 years ago.

The Clinton River once again. For the majority of the first two days, you keep seeing the river pop in and out of view. Which was great really, because it allowed for views of the nearby peaks.

One of the really interesting thing about the Milford Track is the numerous detours you can do. Which, on such a short day like the first one, is a great way to spend some daylight hours. This was a swamp area – because of the poor nutrient value of the swamp, nothing large grows. Which also gives you more great views.

Then it was back to the Clinton. I found it hard to believe the colour at times. Here it went emerald green for a section. It seemed to change colour every kilometer or so.

My lunch stop on the Clinton. After a tough hour of hiking…my day was done. I got to the hut barely after 1pm, and met the other hikers when they started trickling in. Turns out I had a doppelganger – another Colin was solo hiking as well, from Boston. We played cards until dinner time, when the hut warden gave everyone that was interested a good little walk around the area, pointing out the flora and fauna.

After that, it was pretty much lights out for many people, myself included. The next day would be a more ‘proper’ hike, with distances around 18km.

The dawn came with patchy clouds, though the forecast was still calling for deteriorating conditions until a major rain-laden system arrived in less than 24 hours. The hut warden suggested we get an early start, in the event that the rain came earlier than the night-time forecast.

As you keep walking up the Clinton river valley, things get greener. Each step brings you closer to Milford Sound, and also increases the amount of water each plant sees.

The huge amount of rain has caused numerous rock slides throughout the years.

Another enjoyable open area of the track, actually caused by a MASSIVE landslide in 1982.

The debris from that landslide was enough to dam part of the Clinton River, creating Dead Lake. Which has dead trees still sticking up.

The amount of rock that must have come down off the mountain would have been quite something to see (from a safe distance…).

Further on, I rejoined the Clinton River, and spotted numerous Trout just lazing about.

I wasn’t the only one eyeing the trout. You need a license to fish up the trout, and from the wardens it seems that usually there are a few that will successfully fish up a few for dinner each night. Not a bad way to hike, having fresh trout each night!

But while the trout and hawk/falcon were interesting, I was a LOT more excited to see this New Zealand species:

That would be a giant New Zealand Fresh Water Eel! New Zealand doesn’t have snakes, but it does have these water-borne monstrosities, which can grow to well over a meter in length. That’s a lot of tasty sushi!

I hadn’t spotted one in the wild yet, but had always wanted to (I’m not entirely sure WHY, but I did!). Success!

After that, the track makes a point of telling you exactly where to walk…

This was just the first indication of what can happen to the track during rain. On a dry day like I had, the poles seem silly. When you get to that section during heavy rains, the water might be waist high. Then, the poles make sense.

The scenery continued to slowly go by as the day progressed.

It was shortly after that point that I was attacked.

The New Zealand South Island Robin. One of the most curious and fearless little birds that you will find. They love to investigate everything they can with their beaks, including shoes.

And if you stay still long enough, you can teach them tricks.

After playing with the Robin for a few minutes, I continued upwards amidst darkening clouds.

Another detour, this time to Hidden Lake and it’s waterfall.

The view from Hidden Lake, looking back down the Clinton Valley.

One of the species of bird-life the hut warden talked a lot about were the Whio, or Blue Duck. Exceptionally rare and endangered now, the Milford track is one of the best places to spot them, near the Clinton River.

These aren’t Whio. I never did end up seeing any Blue Ducks, but the pair of Paradise Ducks (which are common here), are still entertaining enough. 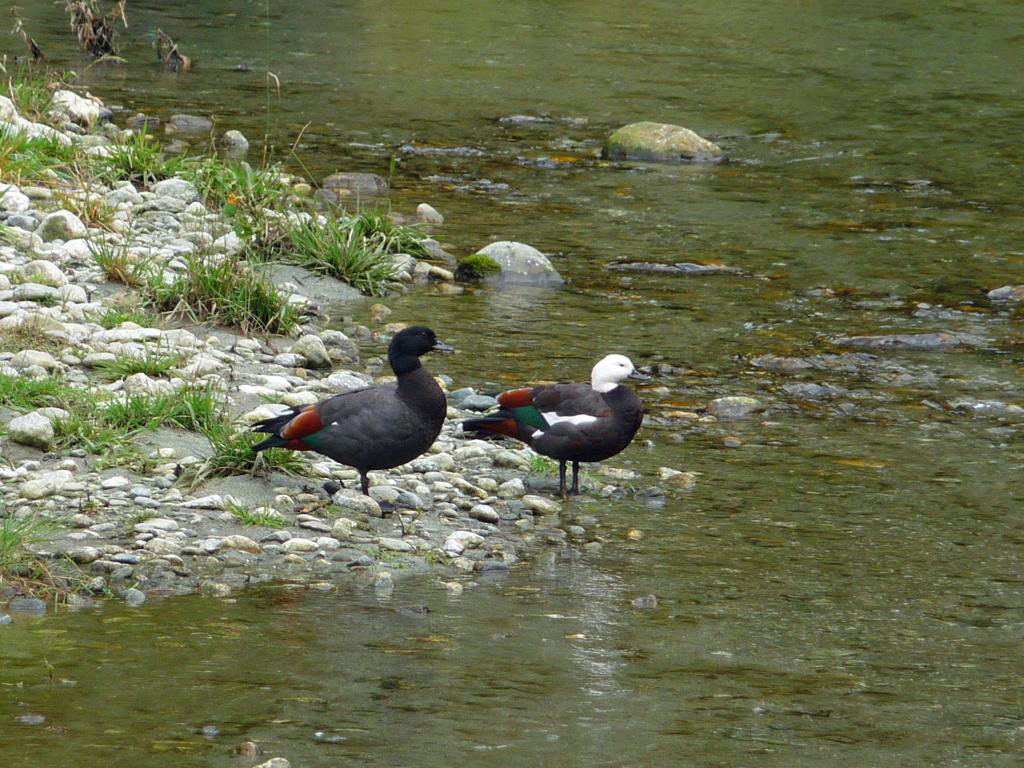 Reaching the ‘Prairie’, the largest open grassland portion of the Milford Track (the MacKinnon pass doesn’t count I guess).

Getting near the end of the second day, this is the final shelter, aptly named the ‘Bus Stop’. 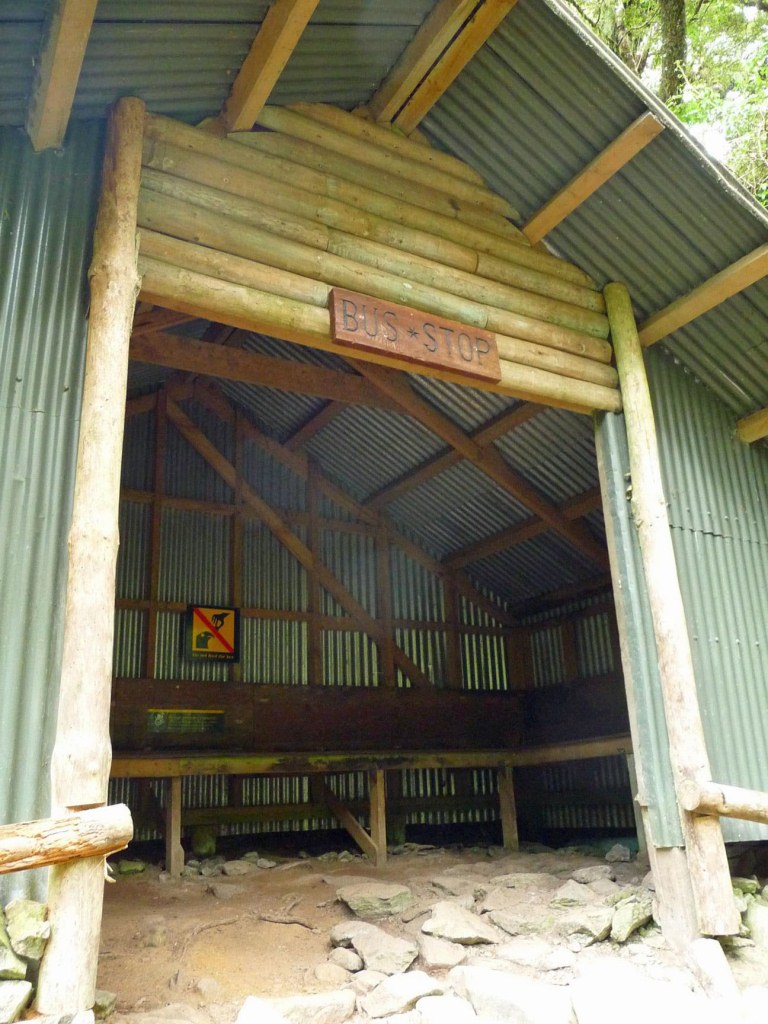 I opted to have lunch a little further up the track, at Marlene’s Creek. Another spot that, in dry weather is pretty neat…but during heavy rains can become difficult if not impossible to cross.

One final look back down the Clinton Valley before finishing off my second day.

Just minutes away from my stay at the Mintaro Hut, the vegetation starts to change due to even more surrounding rain, but also because there is less soil and more rock underneath.

Arriving at the hut around 230pm, I was once again left with a lot of free time to relax and settle in. This was one day where being a bit of a faster hiker came to be a significant benefit – the rain started around 4pm, with at least a dozen people still hiking.

The updated forecast was for 70-100mm of rain in the next 24 hour period. We all fell asleep to the sound of rain pounding down on the hut roof.