Just a few short days after my journey on the Milford, I was heading out for my next Great Walk – the Kepler Track. I had wanted to wait for perfect weather, and my hiking companion, Becky, and I got it just 3 days after I had stepped off the Milford. A bit of a quick turn around, but I’m not going to miss out on 3 perfectly sunny days!

The Kepler Track is probably the most ‘accessible’ Great Walk there is – you can actually just walk to it from the town of Te Anau. It was created in 1988 as a way to off-load some of the demand on the Milford and Routeburn tracks, and thus doesn’t have the history that those tracks do, but also has some nice, more modern amenities. Such as switch-backs for going up and downhill, and a fantastically laid out track itself. Very wide and easy to walk. They made some goofy decisions still (the campground spacing is terrible), but overall, it was quite a different experience compared to the other two Great Walks in the region. 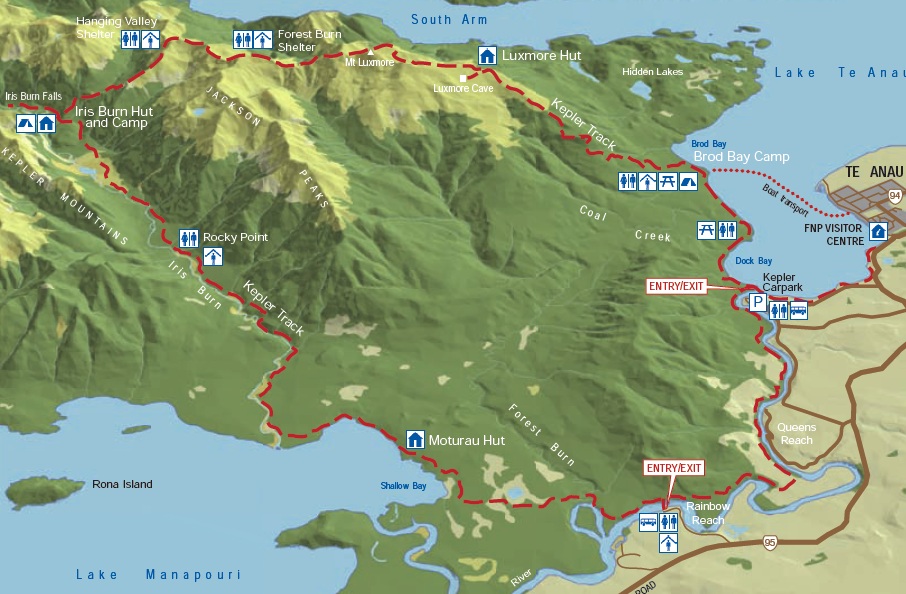 But just because it was accessible, doesn’t make it easy. Actually, it was the hardest Great Walk I’ve done so far, clocking in at 60km and a huge incline (1200m) that has to be climbed and descended. It’s remarkably challenging, especially when camping as you have to handle the climb and descent in the same day, where as the huts break up the days better (and you can do it in 4 days, not 3). I was up for the challenge. Becky survived.

Around mid-day, we found ourselves at the start of the track, making our approach from the Rainbow Reach bridge.

Much of the first and last day of the Kepler are in pleasant forest.

Here, we detoured a little just to cross the control gates for Lake Te Anau.

The Control Gates in action! They maintain the water level in the lake year round, as the water is used for hydroelectricity.

Several hours of uneventful hiking later, we had arrived at our destination – Brod Bay.

Which makes for a wonderful campground for the night! After taking a freezing cold dip in the lake, I set about making a roaring fire while Becky made a delicious vegetarian curry. Yum!

And with that, night crept in quickly and I retired to my tent. In the morning, this lovely scene greeted me when I crawled out before the sun had risen.

After breakfast, it was time to start the massive uphill that would form part of the second day on the Kepler. The first and 3rd days are almost entirely flat – the second has over 1000m of elevation to gain, and then descend again at the end…and about 20km of total walking. It’s a very long day.

Once you get to these limestone bluffs though, you are nearly out of the trees. Finishing climbing? Not close. But a good spot for a break.

We could see exactly where the trees stop and the open views began!

And the open views are why you do this hike!

Looking back towards Lake Te Anau.

From there, it was still another hour to the Luxmore Hut, sitting around 1100m above sea-level. There, we dropped our bags and detoured to the Luxmore Caves.

The caves were pretty steep, and we still had a long day ahead of us, so we didn’t spend too long.

After lunch at Luxmore, we continued hiking up the side of Mt. Luxmore.

Just great views from the Hut.

You could see many kilometers ahead of where you’d be hiking – right up to Mt. Luxmore itself.

After climbing for a bit, it is fun to look back on where you had been. Waaaaaaaaay down there.

Crossing the back side of Mt. Luxmore.

From the back side of Mt. Luxmore, you get great views into Fiordland.

And you could still see where you’d be hiking for many more hours.

Lots of the ridges looked good and fuzzy.

Lake Te Anau continues to sprawl in the distance, just one of it’s many arms that wriggle through the valleys below.

The highlight of the Kepler track is the ridge walking, which you start getting an idea of when you finish crossing near the peak of Mt. Luxmore. 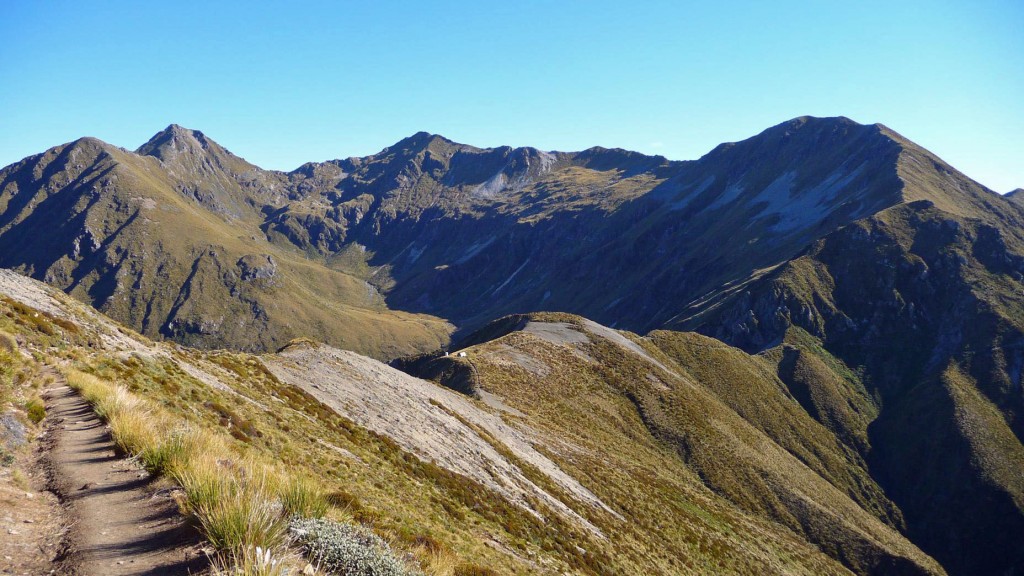 The trail narrows, and just crosses from peak to peak.

As the day was progressing quickly, the shadows were getting longer.

Looking back, we could see where we had been an hour or two prior.

After crossing one of the larger ridges, looking back. Pretty darn great way to hike!

And another ridge stretching out ahead, before crossing the side of another peak.

One of the final views of Mt. Luxmore (the main peak on the right).

Streaming light of the evening sun.

Right before our final small-peak climb, after crossing another ridge. I had lost count of the ridges crossed, but it doesn’t get old!

The start of the downward descent, and the final set of ridges.

Unfortunately, it was also the final bit of sunlight!

The sun was now just hitting the far peaks.

Unfortunately, we still had 3 more hours of hiking to the next campsite. It was a long, slow go in the dark with our headlamps on. We made it to camp around 10pm, set up our tents and went to sleep without eating dinner – it was just too late, and we were too tired.

The next morning, I found out where we camped! Very pretty. There was also a solid layer of ice on my tent! Very cold!

From there, it was back into the forest for the last long day.

You’d pop out in clearings once in a while though, which gave nice views.

And our final break spot, at Lake Manapouri. At this point, you are only 2 hours from the car park, and tasty tasty pizza back in Te Anau!

The Kepler had the unfortunate timing of being right after the Milford for me, and it just can’t quite compare in terms of variety and sheer splendour. That being said, it’s still a FANTASTIC hike. The day spent above the tree line is so unique to New Zealand – usually you just cross a saddle, are above the trees for 2-3 hours, and that’s it. On the Kepler, you spend 5-6 hours just wandering along the ridges, getting amazing sights all along the way. It really is spectacular, especially given the weather I had. Speaking of the weather, this is the first multi-day hike that I FINALLY had *perfect* weather for all 3 days. I don’t think I saw a cloud other than a few morning wisps that burnt off by 10am. It was first rate.

So overall, the Kepler rates pretty well in my books. The two campgrounds were great – on a beach and in a mountain clearing. But having a campground near Luxmore hut would have made MUCH more sense for hiking, breaking up an incredibly long day. The track was great and well laid out otherwise, and very memorable. A lot of people do this as their first Great Walk, given it’s easy access from Te Anau, and it sure is a rewarding hike to start with.