Alternate Titles Include: My Day at the Prom, and Kangaroos, Wombats and Emus, Oh My!

Wilsons Promontory is a large National Park located about 3 hours from Melbourne. As it is the offseason for tourism in Melbourne, a few of the local operators are running fairly good deals. Bunyip was one such operator, offering this tour for FREE when I took their 3-day Great Ocean Road tour to Adelaide. Since I was already planning to do the Great Ocean Road, this was far and away the best deal I saw. A day in a national park seeing wildlife and hiking? Sounds perfect to me!

So it was a bleary eyed 6:45am when I was picked up by Matt, the driver and tour guide for my adventure. We had 3 more stops to pick up others and by 7:45 or so we were on our way out of the city. There were 6 other keen tourists in addition to myself, so lots of room in the comfortable 13-person van. It took us about 3 hours to get there. Wilsons Prom isn’t the closest spot on the map!

It didn’t take long for us to find something to hop out of the van for. Shortly after entering the park we hopped out of the van and wandered over to inspect a group of Eastern Grey Kangaroos.

There was also a goofy looking Emu hanging around nearby. The second largest bird in the world after the ostrich.

So goofy looking. But the kangaroos were undeniably cute, especially the smaller young.

We continued our walk out to a grassy airstrip. Here numerous emu and kangaroos could see grazing and lazing about. Watching kangaroos hop about had me smiling for the rest of the day.

From there we continued into the heart of the Prom, stopping at a beach and then going inland for lunch. Where we were joined by some curious onlookers. 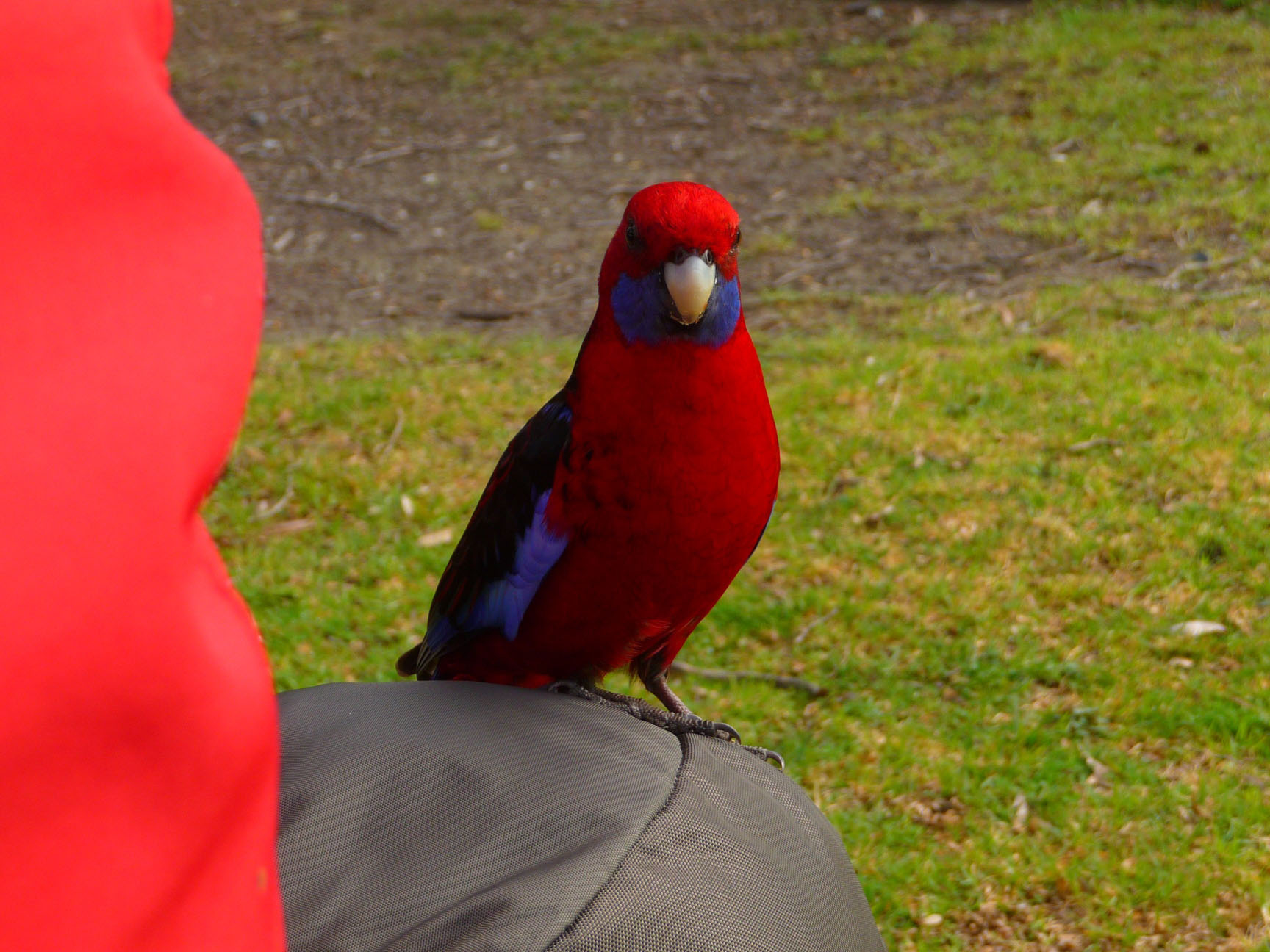 There were also these little flighty birds, which reminded me of New Zealand fantails. 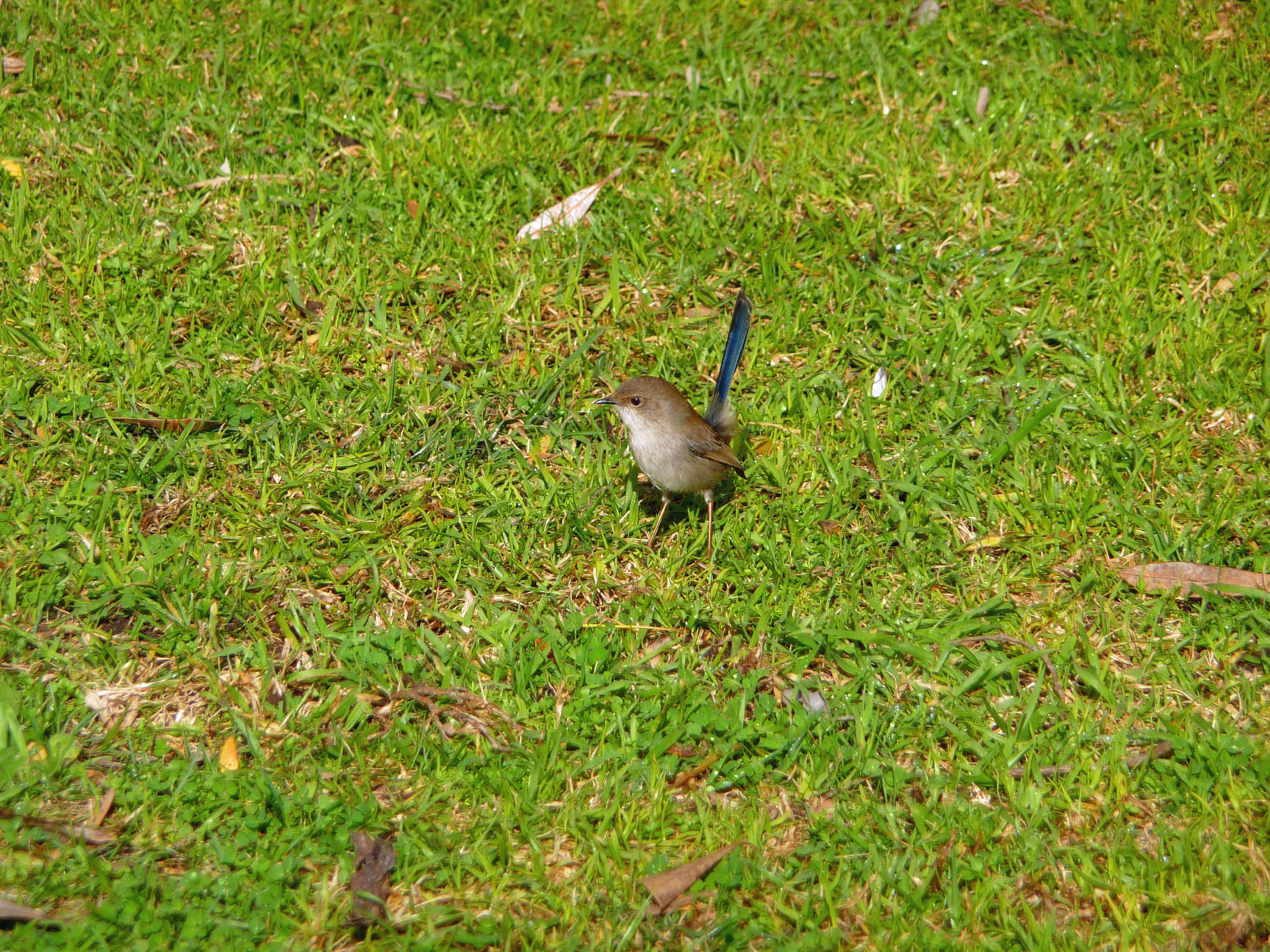 The red parrots, called Rosellas, came out in large numbers as we settled in for lunch. They were quite adventurous and obviously used to humans in the area – one climbed onto one person’s shoulder and stole part of her sandwich from her hand. Others were content to running around on the ground nearby.

After lunch, it was hiking time! We started near the Tidal River and beach area and headed out towards Pillar Point.

Pillar Point stretched out from the main part of Wilsons Prom quite a bit, affording a good view back. The morning rains had mostly cleared by now.

From there it was a coastal walk towards the next beach over, oddly named ‘Squeaky Beach’. This area was my favourite of the hike, where large rocks came down into the ocean. The tide was nearly at it’s highest at this time and the waves were pounding into the rocks with impressive results.

The white-quartz sand of Squeaky Beach.

The rest of the hike took us over to a third beach, where we kept an eye out for a Wombat that is known to be in the area. But we were probably a little too early in the day. Wombats are mostly nocturnal, so he was probably still sleeping.

Several hours of fairly easy hiking and many animals later, we re-boarded the van to start our way back. This large valley here was the scene of extensive flooding not long ago, not to mention severe bushfires during a different year. The whole area of Wilsons Prom is a bit of a geological oddity. It’s not actually part of Australia, though it appears that way. It is actually more connected with Tasmania, though the land connecting it is deep under water. The land bridge connecting Wilsons Prom to Australia is all blown sand.

We got one final wildlife stop to try and find some Wombats. We spotted one in the distance, but a family with doofus children scared it well away before we could get within 100 meters. We still got to see lots of kangaroos doing their thing.

And on the walk back to the vehicle, we spotted something quietly munching away at the grass…

The resident wombat hadn’t gone too far it turned out! This little guy is considered a juvenille, but still fairly sizable. I had no idea they grow as large as 30+kg!

When they grow older, wombats tend to be very reclusive. But this one being fairly young, it was quite curious. I sat completely still and it came within about a meter of me and my camera before backing away.

Quite cute. Their closest relative is the Koala, so they look soft and cuddly. Apparently they are anything but though – at one time they were kept at pets, but had a strong propensity to bite and burrow constantly. Probably not the best to have around!

A very successful day complete, we made our way back to Melbourne as the sun set on a fun day at Wilsons Prom. I forgot how enjoyable it can be to simply sit back and let someone else do the driving and planning for a day!