Melbourne has two major tours within easy driving distance. The first is the Phillip Island Penguin Parade. Hundreds of little blue penguins call Philip Island home and arrive in droves once the sun sets. Having already seen numerous little blues while I was over in New Zealand, I instead opted for the other option, which also worked to my advantage of taking me to my next major destination (Adelaide). I was going to explore the Great Ocean Road.

I was with Bunyip Tours once again, the same company that took me to Wilsons Prom. So I knew I was in good hands.

It was a far too early morning (6am) when I was picked up from my hostel. Not to mention, drizzly and dreary outside. After corralling the rest of the group (9 total including Steve, our guide and driver), we departed Melbourne and headed to the shoreline. Most of us promptly passed out in our seats.

First stop was Bells Beach. Normally (especially in summer), a very busy spot, Bells Beach is famous for it’s surfing. The wind today however was the wrong direction, so no surfers were seen.

From there we would enter the actual Great Ocean Road. This is the third iteration of the entry sign – the others have been burnt down by wildfires.

Next stop was the small village of Lorne. We had about an hour here, so while the others shopped I went for a walk along the coastline. I made it as far as the pier (out of picture to the right). Lorne’s Pier hosts the locally famous ‘Pier to Pub’ swim race. Here, contestants run and jump off the pier, then swim the 1200m back to shore into the bay pictured below…then run up to the pub for a pint.

I took the slightly drier option of walking back along the exposed coast.

Back in Lorne township, I noticed many Sulphur-Crested Cockatoos hanging around. These are remarkably big birds.

They also travel in packs. Asking Steve about them later, these birds can actually become so numerous that they can cause quite a bit of devastation in farm areas.

From Lorne we continued along the Great Ocean Road. I don’t even know where this stop is, other than the weather broke for a bit, so we quickly hopped out of the van for a few pictures of blue skies! From there, we continued driving down the coast.

We went along until getting to our lunch spot. The Cape Otway lighthouse was an important addition to the region back in 1848 – this area is notoriously dangerous for shipping. Numerous shipwrecks are in the area. We got a light lunch and a quick lesson on what it meant to live out here during the 1800s. In a word, remote. You’d go a year between food drop-offs, which often would be the only outside people you’d see for the entire time.

After lunch, we headed back towards the Great Ocean Road (the lighthouse is a small detour). But it’s a very worthwhile detour, as a certain marsupial love the nearby trees.

Victoria is the only state in Australia that lists the Koala population as ‘large and thriving’. In other states, the Koala is either at ‘Vulnerable’ status, or rare. They don’t live in the West or Northern territories at all. But here on this part of Great Ocean Road, they were far from as we were about to find out. 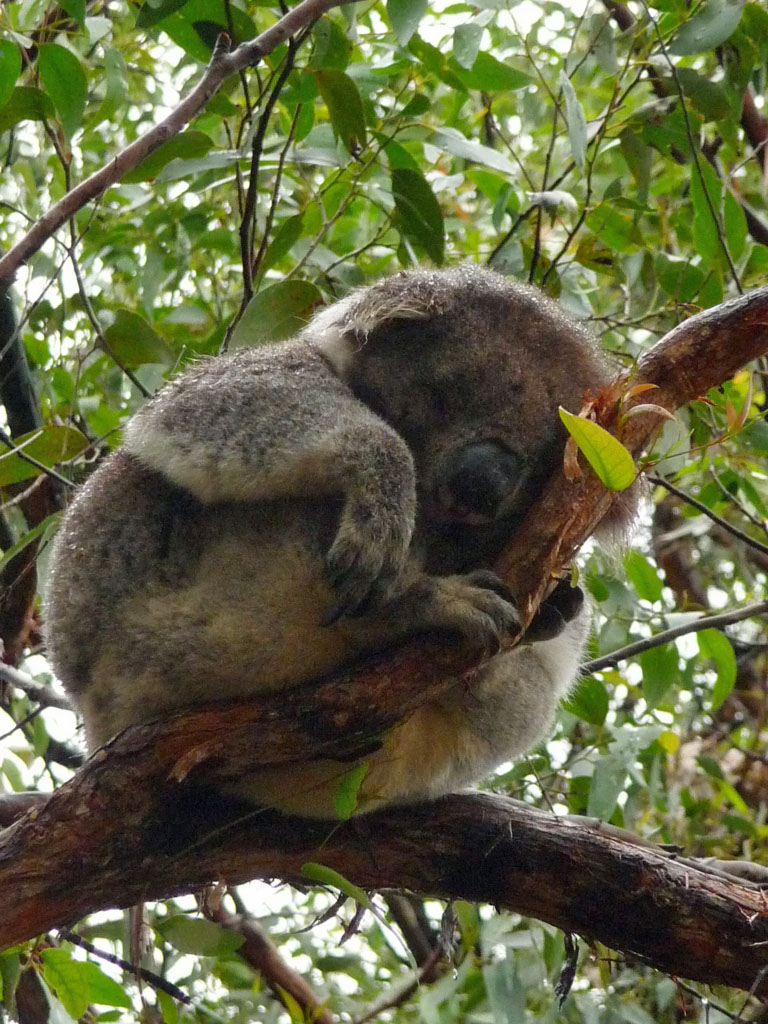 Sleeping is naturally a big part of the koala’s life. 16-20 hours a day is spent simply sleeping. A tough life indeed. But because there we just so many of them around this area, we managed to find a few that were awake.

While a few people in the van went back to the lighthouse to retrieve a forgotten item, the rest of us ventured up the road a little further and were treated to an amusing sight – a Koala crossing the road. They look very strange walking on the ground.

The Koala was quite tired after his 10 meter journey. He too frequent breaks to catch his breath before eventually climbing a new tree.

Despite their cuddly and cute appearance though, the Koalas in Victoria are starting to become problematic. Specifically because they will downright destroy trees and forests. In significant numbers, Koalas will strip trees of ever single leaf, then move to the next and next with ferocity. In a relatively short time, small patches of forest will simply die. On our drive back to the Great Ocean Road, Steve pointed out several areas where the Koalas had killed off acres of trees. There isn’t much that can be done about it though, the Koala is a protected species.

From there, we rejoined the Great Ocean Road and headed towards what many consider the highlight of the trip – the Twelve Apostles.