The idea was a simple one. 5 of us from the tour were dropped in Ballarat at around 5pm and given our bus tickets to Adelaide. The bus didn’t leave until 10pm, so we made our way to a nearby McDonalds, where we spent the next 4 hours or so waiting, eating, and using their internet. It didn’t appear that Ballarat had much else to do on a Sunday evening, but given the time, that wasn’t overly surprising. The rain and exhaustion from our 3 days of travel kept us pretty sedetary anyways.

Shortly around 10pm we jumped on our bus to start making our way, overnight, to Adelaide. It’s surprisingly far, at over 600km away. 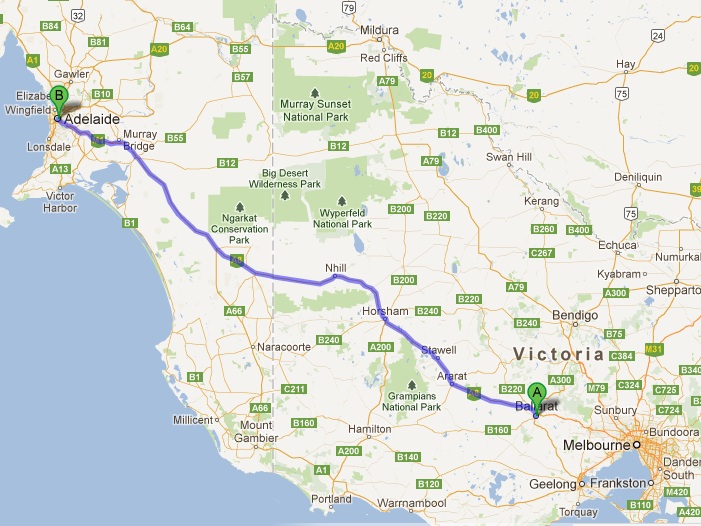 Right away, things weren’t looking good. We were situated at the VERY front seats of the bus. And even I, at a whopping 5’8″, had less than necessary legroom. We were crushed into the seats. And once the drive started, it became readily apparent that sleep would be difficult. Every few minutes we would pass trucks going the other direction. The drivers would flash their high-beams as a way of greeting, constantly alerting us in the front rows. I pulled my sweater over my head. Then I was cold. I fell into a fitful sleep.

For about 30 minutes. At midnight we pulled into a truckstop in the middle of nowhere for our first of 2 scheduled stops for 30-60 minutes. At that point the door was opened, and left open for people to come and go. Which meant cold air directly onto the front seats. At that point I gave up on sleep, got up and went to find some chocolate. I also took a look to see if the station sold things like gravol, to help knock me out, but no such luck. I returned to the bus and curled back into a ball, clutching my chocolate.

At 6am we pulled into our final stop. The 5 of us figure we got about 2 hours of sleep each, give or take. Bleary eyed and exhausted, we stumbled towards our hostels in the dark of the new and unfamiliar city of Adelaide, all agreeing that it was the worst bus ride any of us had taken in Australia.

One thought on “So much for Sleep”