Before coming to Australia I had a few things I figured I *had* to do while I was here. This list included such common activities as swim at the Great Barrier Reef, see the Red Center, and find some Koalas, Kangaroos, and Crocodiles. 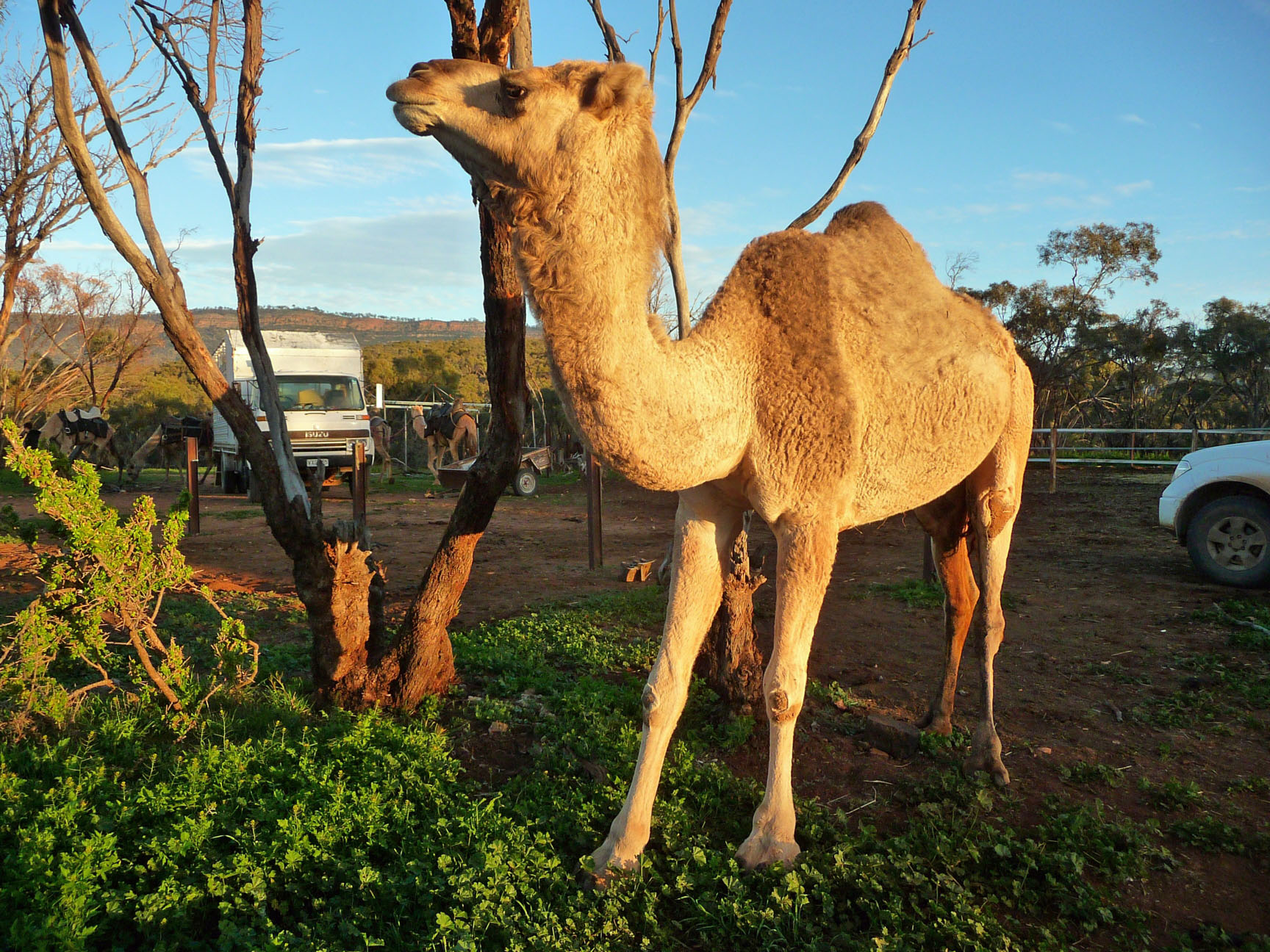 So it turns out that Australia has a lot of camels. In fact it’s got the most wild camels in the world. Not the most overall, as many camels are domesticated, but as far as feral camels go Australia has well over a million of the dromedaries just running around, free as can be.

These ones were domesticated. Sort of. 🙂 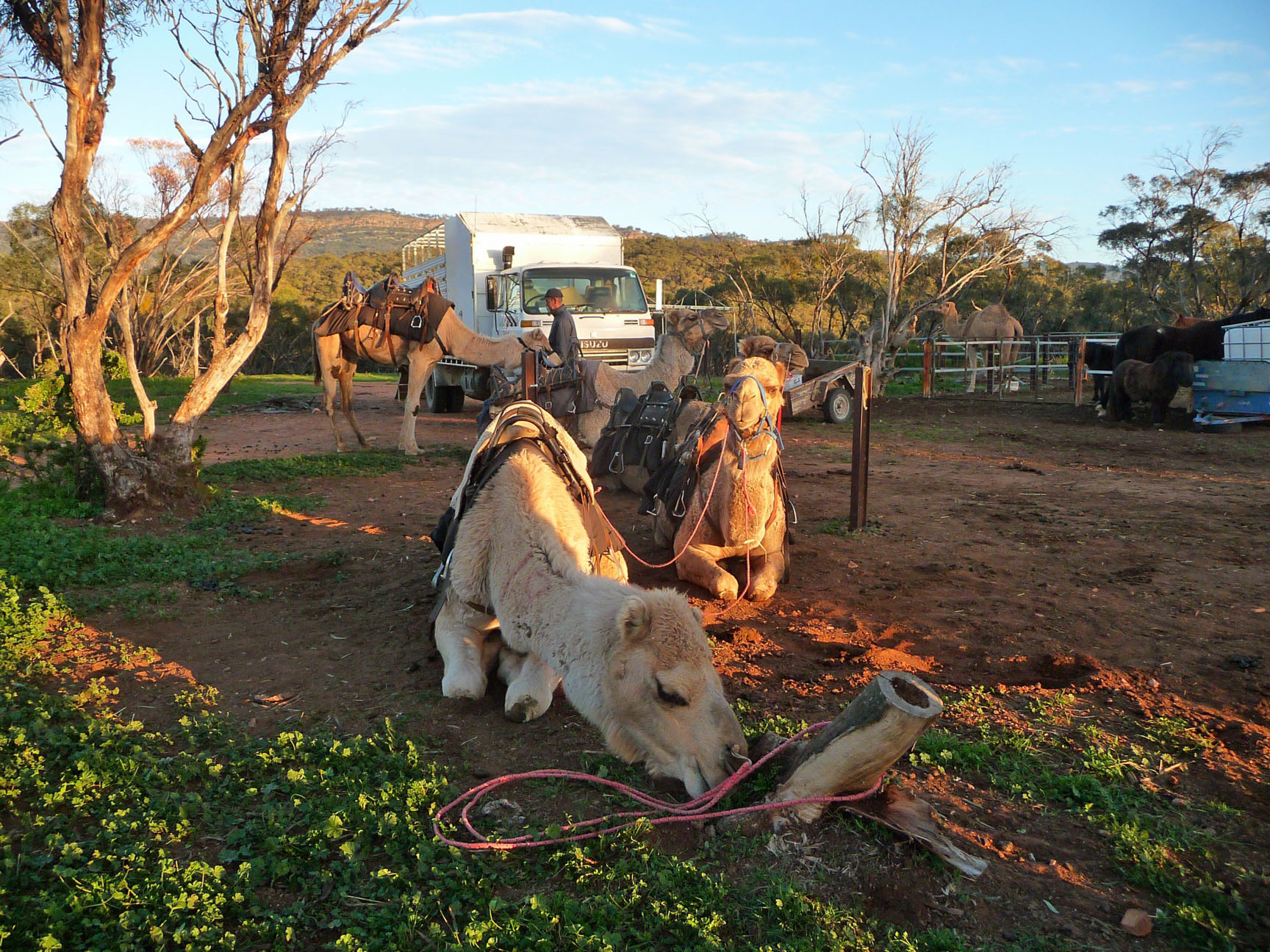 It is amusing to watch a camel sit down. Things just don’t look right. The legs fold right underneath the camel as if it were built by Ikea and easily pack-able. And the beast is still quite large. They are considerably larger than a horse but it is only apparent once you stand next to one.

Or get on one. 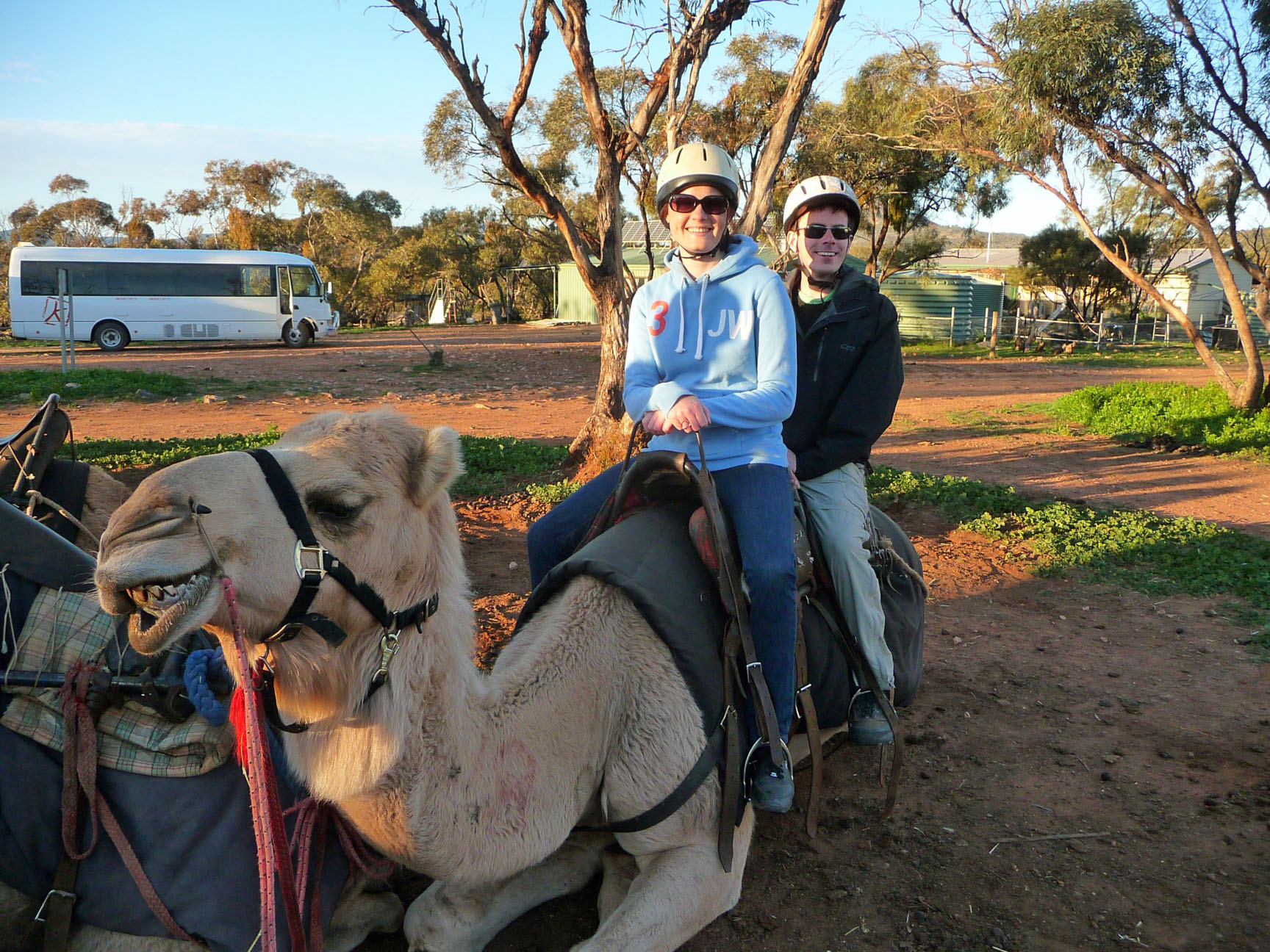 Meet Feral, the camel with a face only a mother could love. Camel’s aren’t exactly sleek animals that horses are. But, they are incredibly hardy. That is why they are here. The Camel isn’t native to Australia, they were imported in the 1800s to help with heavy labour, carrying large loads over long distances, especially between the west coast and into the Northern Territory. Once motorized transport became available camels became obsolete. They were set loose into the wilds of the Australian outback, where they have since thrived. Being built for dry climates, being presented with the vast open land of the outback the camel has developed a huge territory. They have no natural predators and are actually becoming a bit of a nuisance in parts, as they can out compete the local wildlife for resources.

But for today, my only experience with a feral camel was riding one named for being wild. Turns out that when they stand up, camels are really, really tall.

I unfortunately left my camera with Woody, our tour guide, and don’t have pictures of our quick trip around the farm. It was relatively smooth riding a camel, moreso than a horse I thought. You just need to watch for trees, as Feral liked to snack and seemed to forget (or choose to ignore) that she had two figures on her back and thus had an increased height profile.

Once back on the ground, camels are soft and relaxed animals. They even let you sit on their neck. 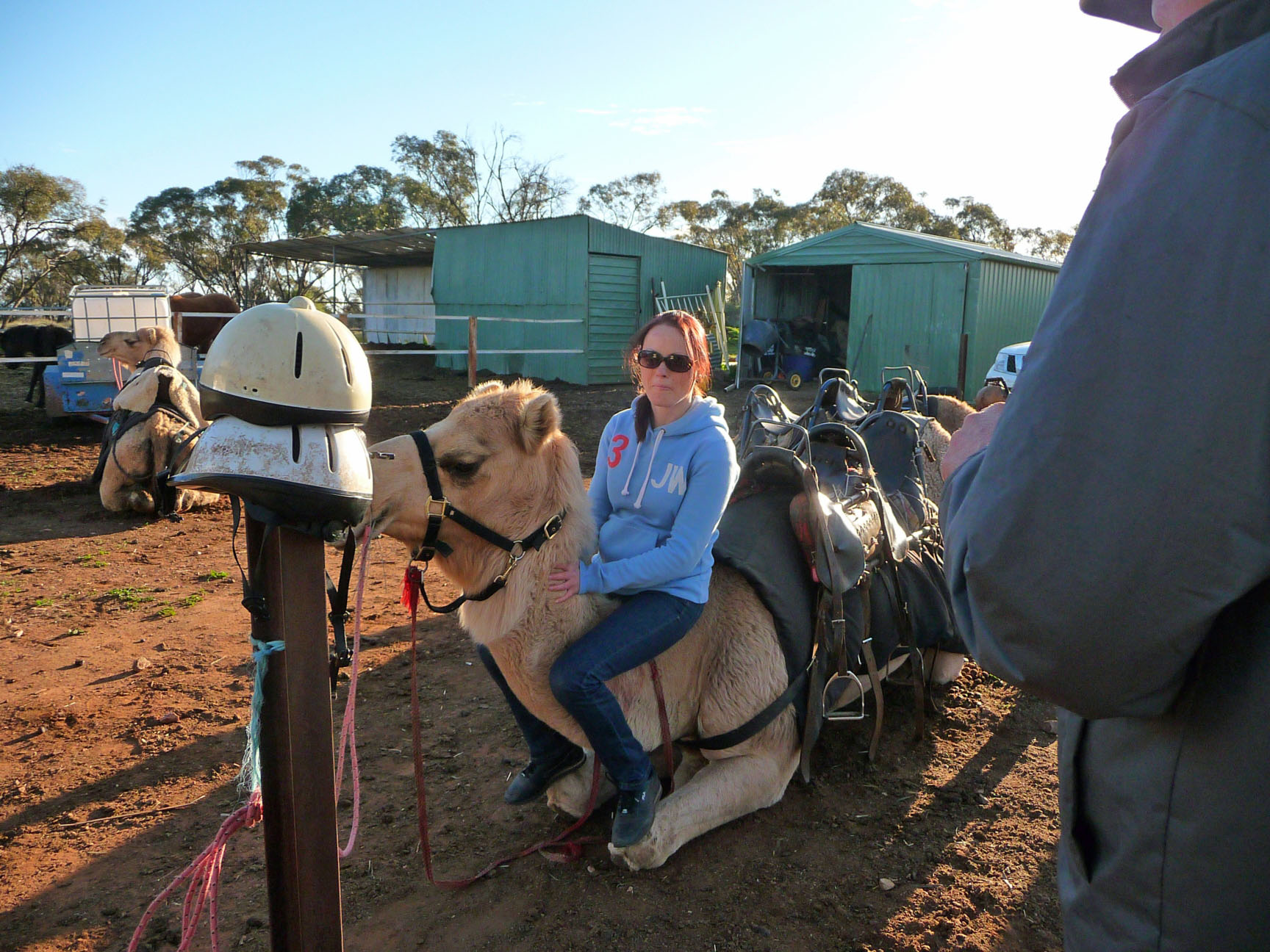 Feral was pretty relaxed the entire time, slowly munching away on some grass she had found on the walk. 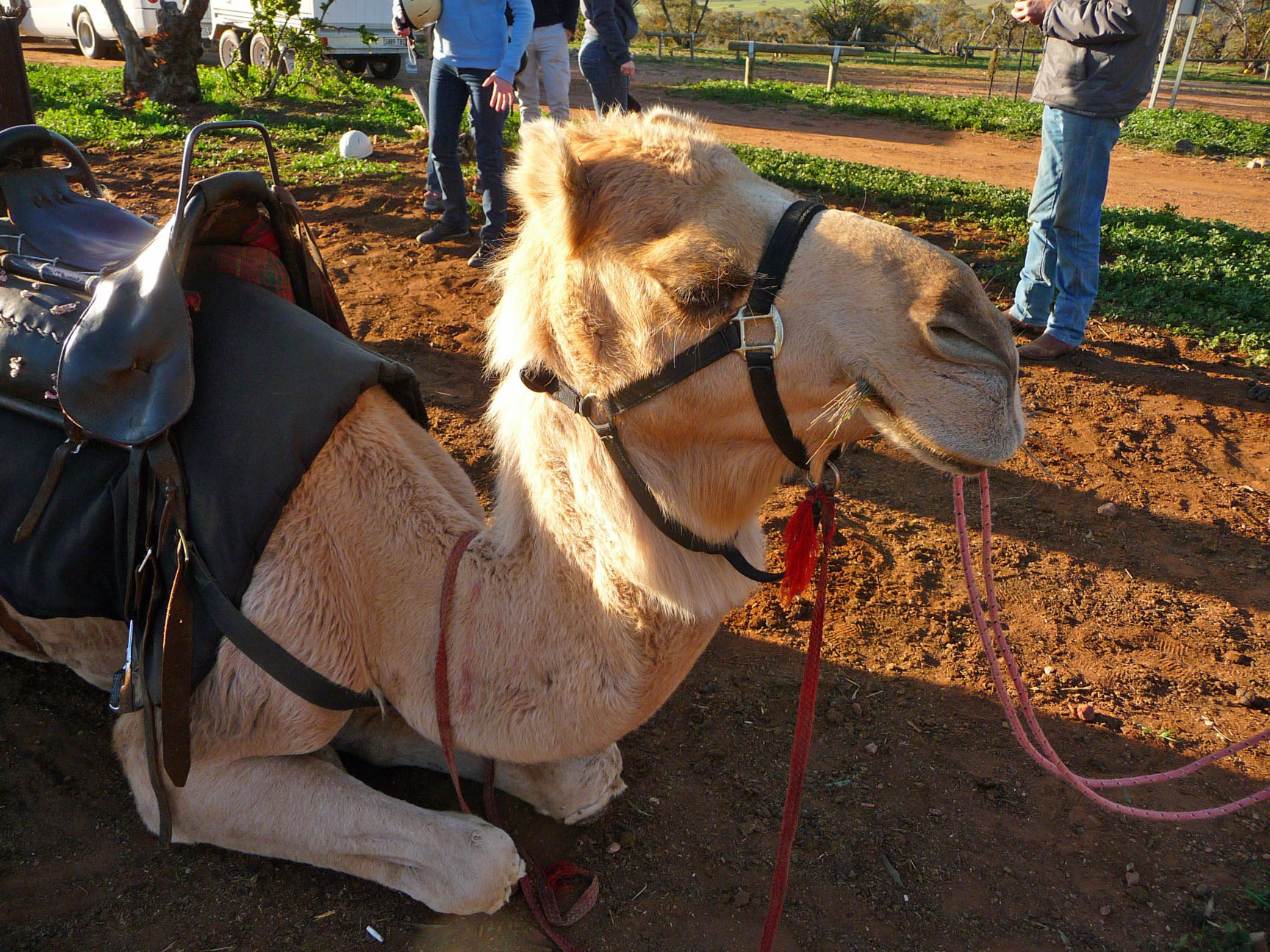 Thus ended my experience riding a camel. From here, the 7 of us that had opted for this fun, bleary-eyed, early morning activity returned to Quorn and met up with the other, more well rested folk. From here we headed north. It was time to see the mole people.