Finishing up our Red Centre tour, the group was deposited in Alice Springs. This is the primary town of the Outback in the centre of Australia – there is nothing else out here.

I had several days here to relax and explore the city itself before continuing north. One of the best ways to explore a town? Climb to the top of it. In Alice Springs’ case that would mean Anzac Hill. From my hostel I first had to cross the Todd River, which splits part of the town. It has at times flooded portions of the city. This was not one of those times.

The Todd was bone dry. It was still middle of the dry season (August) when I was there, and now that it is in late September, Alice Springs has broken a record for it’s longest dry spell. The last rainfall in the region occurred over 150 days ago. This place is bone dry. The rainy summer season will bring a bit of precipitation but that is still a few weeks away at least.

The climb up Anzac Hill was only tiring in the respect of the heat. 30C+ is typical in the winter, though as one can expect from a place that hasn’t seen rain in 5 months, humidity isn’t an issue.

There was a small amount of reading to be done up at the top, with commemorations of those that have fallen in various wars that Australia had participated in. But I was also there for the views. 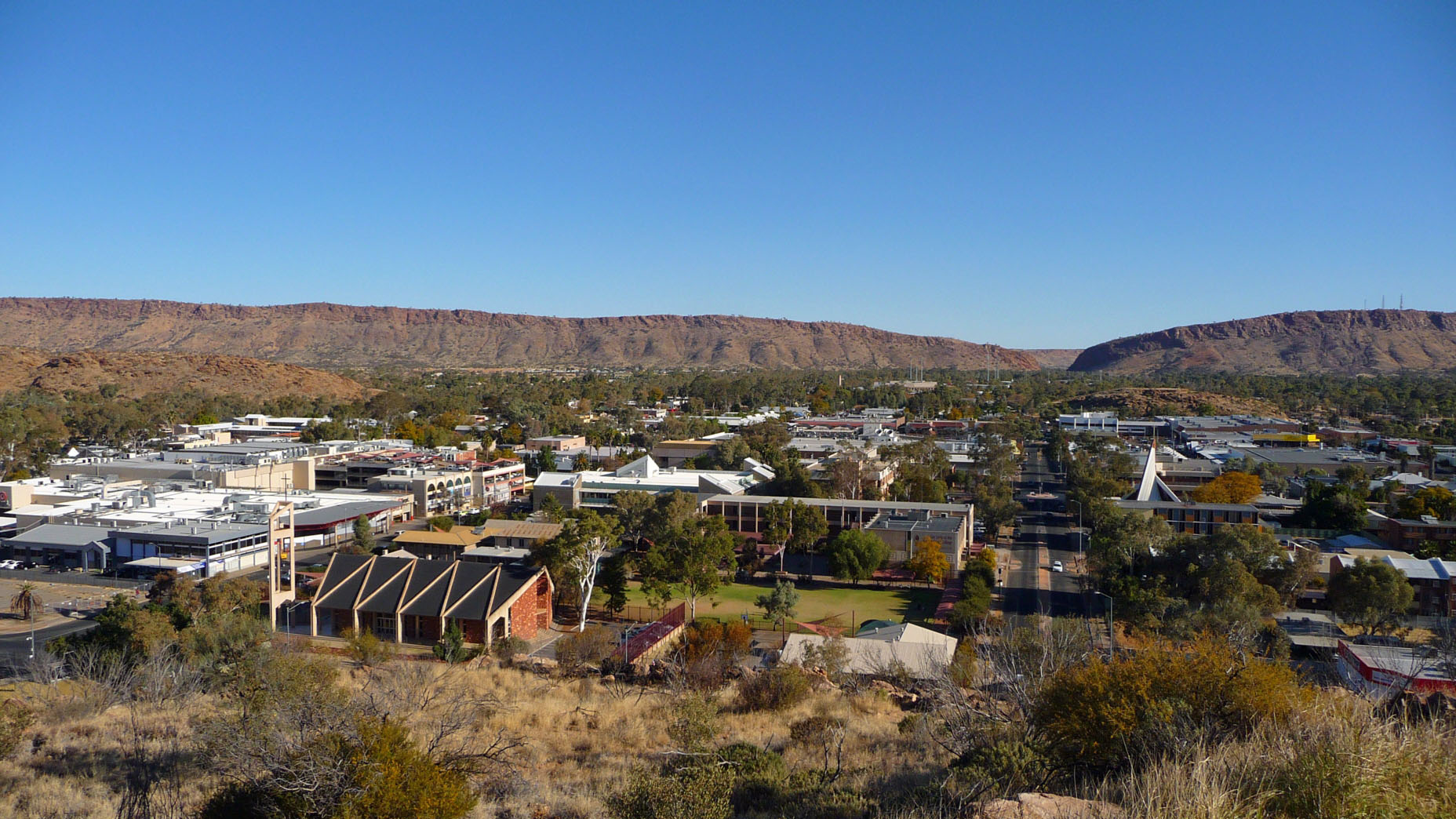 The downtown core of Alice Springs. For the most part, a typical looking town in an atypical environment. Because of strong Aboriginal history in the area there is also a noticeable Aboriginal population living here, the first city that I’ve been to that feature the people. I’ll try to tread carefully with my words here, as racism is an incredibly touchy subject in Australia and I do realize I’ve only been given a small snapshot of the entire picture here in Australia. I would describe my impression of the Aboriginal people I’ve met in Alice Springs and Darwin as…disheartening. They appear to be a people that have been left behind by the advance of civilization and don’t seem to care. If it were in the pursuit of continuing one’s culture and heritage, I could understand, and honestly would love to see that. But that didn’t seem to be the case that I have seen. Reports of rampant drug use, alcoholism, violence, low education rates and high poverty follow the culture here in Australia. And a good number don’t seem to care. I will more than readily admit that this is a culture and civilization which has undergone tremendous abuse and mistreatment since European Invasion. The Australian Government has a downright horrific history of racism, intolerance and oppression. This was extended to other cultures, but the Aboriginal people bore the brunt of it. They weren’t even given the right to vote in some areas until the 60s! Yes, the 1960s. They also weren’t part of the national census until the 1960s either. They simply weren’t seen as people it seems.

I talked to one of my tour guides in Darwin about this. He has a distinct interest and love of the Aboriginal culture, including being involved in their arts, learning the local language and history. And this was done before he became a tour guide, it was from a genuine interest in their civilization. I compared and contrasted the Maori culture of New Zealand, which I was very impressed by the vibrance, prevalence and prominence in New Zealand life. One thing that Jeff felt that was different between the two was Pride. Pride in one’s culture and heritage. The Maori people are a very proud culture, and have been for hundreds of years. Historically, Aboriginal culture generally doesn’t acknowledge pride – it is somewhat of a foreign concept. The culture much more centers around the belief of the interaction between the land and all of its pieces, man included, and that everything is part of a large singularity. Without that history of pride in one’s culture, it’s harder to maintain when other cultures and ideas are forcing themselves upon you.

Enough on that subject though, as it’s one I’ll definitely admit to knowing little about in the grand scheme of things. I had a target for my next day. The peak of Mt. Gillen (as can be seen in the far right).