A kilometer or so from the Desert Springs Park marked the start of the trail leading to the peak of Mt. Gillen. Well, sort of. There really was no trail markings, but it also wasn’t hard to find your way. Trails criss-crossed constantly across the low vegetation and you could easily keep your goal in sight as it towered above everything else.

This was the area that marked the beginning of the track, Flynn’s Grave. John Flynn was a foremost pioneer in the Outback in the field of medicine. He saw a great need for medicine in these small, remote, inaccessible communities that were scattered all over Australia and went about creating the Royal Flying Doctor Service, which was the world’s first air ambulance service. It is a not-for-profit service that continues to serve the Outback to this day.

But as I mentioned, there was no actual trail head but there was no mistaking the trail. The confusing part was the lack of signs when trails crossed. But no problem, just point yourself towards the peak and eventually you’ll find yourself at the base of the mountain.

Which I did after a short walk. When standing at the base it was more than apparent that the hiking would get much tougher quickly.

Partway up, the views were getting very rewarding quickly. The joys of poor soil conditions and a harsh climate – no trees! Makes for good views when hiking.

A view of what I still had to climb up. It always seemed that the last 20 meters in elevation are the hardest, and Mt Gillen appeared to be no different.

Just before starting the final rock scramble (the hike became a climb for the last portion), the views of the remaining rock was daunting.

But a little sweat and hard work and I was rewarded with a stellar view from up top.

There is just something fantastic about standing on the highest point of a hill or mountain. The views (on a beautiful clear day at least) are simply unparalleled and most often far superior to any you get on the way up.

The view towards the trig station where I enjoyed my lunch (the small black dot on the right), and Alice Springs stretching out far below).

My view during lunch. If you wanted to, it is actually possible to ridge-walk back to town. I had a shuttle to pick me up back at the Desert Park though so I didn’t want people to think I went missing. Still, it was an enticing thought as the views and weather were lovely. 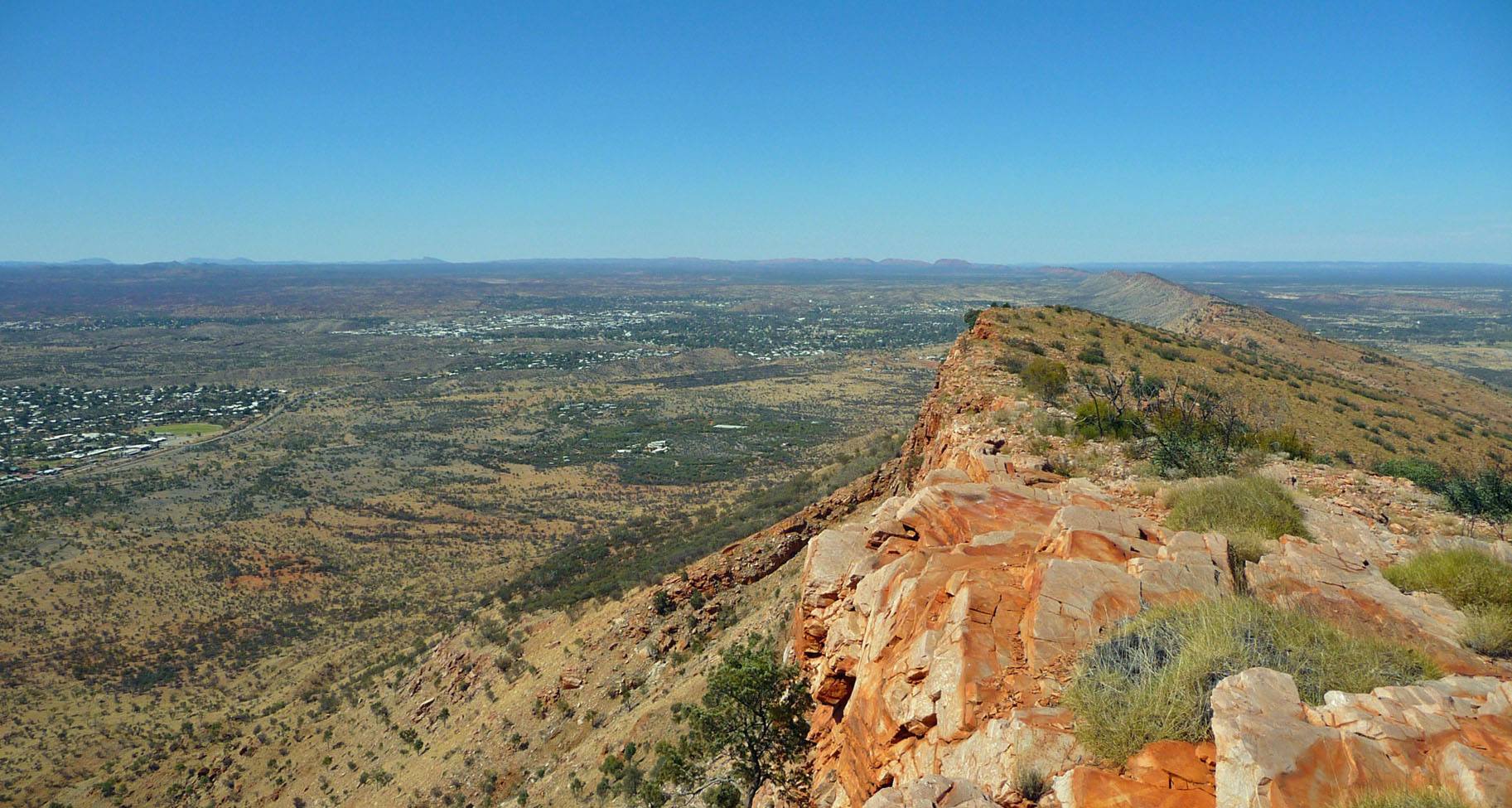 After enjoying my packed lunch and some quiet time (I was the only one up there for most of my time), I started to make my way back down. Before I started my climbing portion to get off the top, I spotted other enthusiastic climbers. Rock Wallabies!

So very cute. One last look at the range as it stretches out.

Back on the valley floor, I returned to the Desert Park. Along the way I stopped to take a photo of one of the distinctly unique desert flowers.

Since I had about an hour to wait until my shuttle back to the city and still had access to the Desert park, I got to see the afternoon bird show too!

And I was glad I decided to come back as the show featured several new birds. That being said, I wasn’t overly thrilled to see my nemesis, the Australian Magpie. Evil.

This guy was my favourite of the second show, the Boobook owl. The ranger talked about his excellent eyesight and agility…and this little guy flies straight into a pole. Poor Boobook. He also didn’t want to leave the stage, returning twice before finally exiting with a second ranger.

After that excitement and a tasty ice cream, I boarded the shuttle back to town and relaxed the rest of my stay in Alice Springs. I had another section of long distance travel to prepare for in the coming days.