I’ve only been honked at once so far (and I don’t think they honked just because I look sexy covered in layers of clothing), but I’m pretty sure the roads here will be the death of me. Not that the traffic or drivers are all that bad (not that I’ve noticed at least), just that there is constant traffic, and they all drive on the wrong side of the road. This is Ponsonby Rd, near my Hostel: 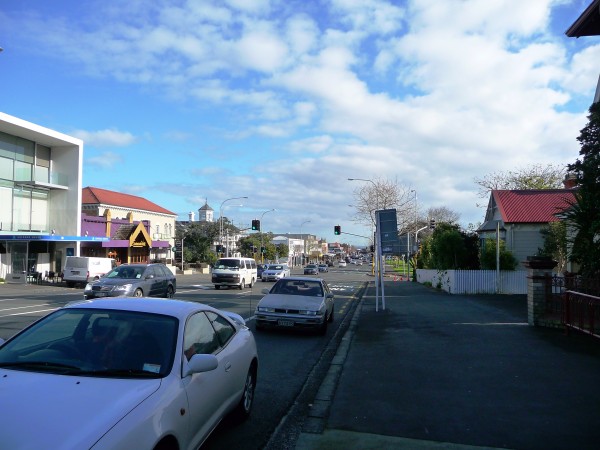 In my little world, this is how I still see traffic:

Doesn’t that look much better? I think so. I know how to avoid getting run over by these cars. The ones here in New Zealand? Seems to be a daunting task so far. Driving my own vehicle soon should be…interesting (read – potentially terrifying for myself and others).

So, rather than learn, I’ve instead taken to public transit as a means of getting around (also to rest my limpy leg). Thankfully, Auckland has an outstanding public transit system. It’s somewhat confusing at first (there seem to be several different metro bus companies or just all use different names? I’m still not 100%), but the buses are frequent and inexpensive ($1.80NZD, or about $1.50 Canadian). They also have a train system similar to GO Transit in the GTA for the longer trips. I took one yesterday out to the suburbs in search of a cheap retail environment (more on that in the next post…).

Again, very convenient and useful. After finding some groceries and a laundry bag, I took the train back and found dinner. After a tasty sushi dinner, I decided to take the bus back to the hostel – and ended up walking all the way back because I never did find the proper bus stop (turns out I can’t read a map sometimes).