After spending a week in Sydney, right away one thing was noticeably different right away about Canberra.

Granted, Canberra is a much smaller city (350,000) compared to Sydney (4.5 Million), but the feeling was downright eerie. It turns out nobody lives in the downtown area of Canberra and so on weekends, the place simply empties out.

The feelings continued as I entered the wide expanse of the ANZAC Parade. At the far end stood the Australian War Memorial, with Mt Ainsley rearing up behind it. 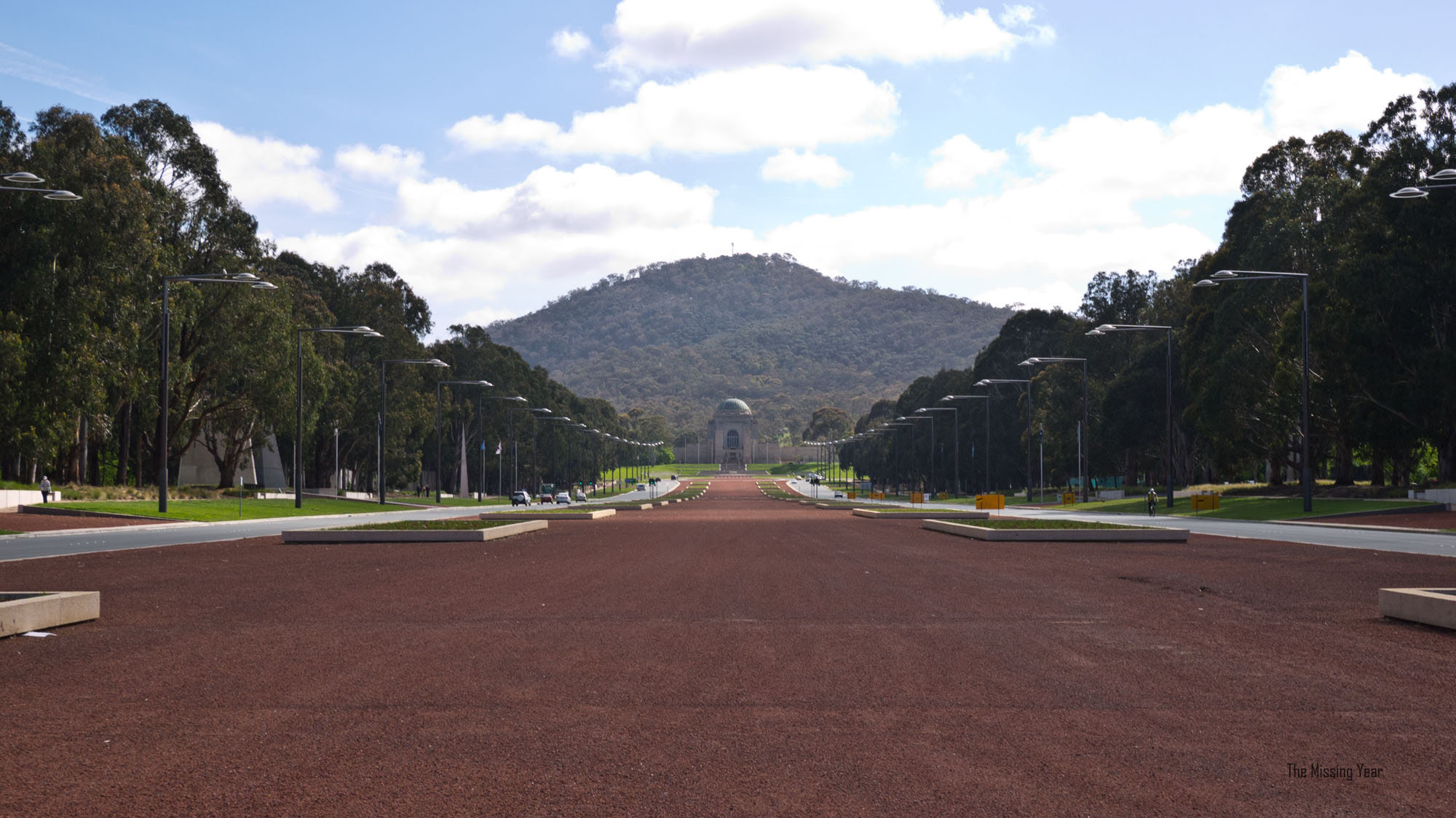 The ANZAC Parade was a fascinating spot. It was filled with huge concrete memorials dedicated to the brave men and women that have served overseas for Australia in various conflicts. This was the Vietnam Memorial.

Upon reaching the War Memorial, looking back down the ANZAC Parade one can see all the way to the Old (Big white building in the forefront), and New (Grey building in the background) Parliament Buildings, that actually sit several kilometers away.

I had made it to the massive Australian War Memorial. More than any other museum in Canberra (and there are many), this was the one I had been looking forward to seeing the most.

It did not disappoint in the least! The AWM really is one of the finest military museums I’ve been to. In addition to various videos, photos and lots of text, they also make use of extensive and detailed dioramas to depict various battles and scenes.

Overall it was a fascinating and detailed place. World War I was the most prominent gallery, with the Gallipoli Campaign receiving the majoring of the space. Gallipoli was where many Australians felt they came together as a country and proved themselves on a world stage – so it’s a seminal part of their history. The battle lasted for months, and was ultimately a lost effort. But the legend of those sacrifices and contributions continue to resonate with Australians today.

It was also interesting seeing the role Australia played in the two World Wars. For the First World War, Australia sent an incredible number of troops to Europe – nearly 10% of the total Australian population served in Europe, with nearly 40% of men aged 18-44 enlisted. An incredible contribution, and they unfortunately suffered great losses – Nearly 65% of those that served were either injured or killed in action, the highest amongst the Allied forces.

The Second World War was noticeably different for Australia, entirely due to Japan’s presence. For the first few years of the war, Australia supported Britain, primarily in the African and Middle Eastern theatre. Everything changed as Japan expanded it’s territory though, and Australia soon became engaged in a battle of the seas. The attacks on Darwin, Broome and other towns of Northern Australia also shook confidence at home, so most troops in the second half of the war were concentrated on the Pacific side of the war, joining forces with the newly entered United States. Eventually Japan was turned back (Midway being a famous turning point) and Australia helped with a lot of the mop-up efforts, removing pockets of Japanese resistance from numerous islands in the South Pacific.

I spent a few hours in the War Memorial. You could probably spend days and still not have read everything. The amount of information present is staggering, but it’s all wonderfully done. Eventually I wandered up to the Hall of Memory.

Along both sides were walls of names remembering those that had given their lives in the numerous conflicts that Australia had seen in the last 100+ years.

And then there was the Hall of Memory itself, an expansive place with a gorgeous dome up top.

The Hall of Memory is home to the Tome of the Unknown Soldier. He represents all of those that have fallen in service of Australia. 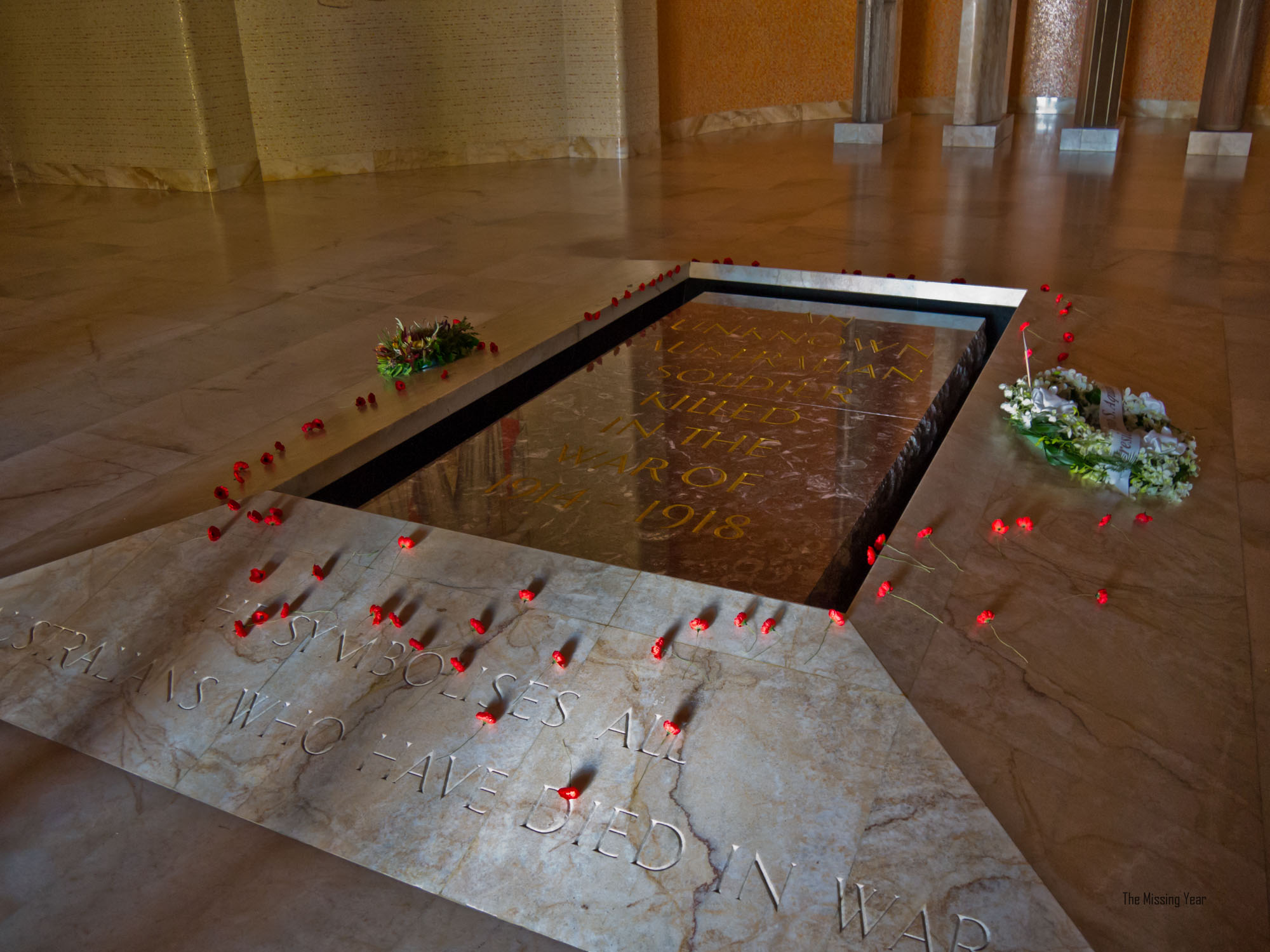 Having spent the morning reading and taking in lots of information, I spent the afternoon hiking up Mt. Ainsley, situated just behind the War Memorial. The view from the top was great, and starts to give a good idea of just how planned out the city of Canberra is. It simply sprawls like crazy, and when I was walking around I really felt that this was a planned city. You could see how well streets had been laid out, not only in their direction and use of roundabouts to keep traffic flowing, but by the fact that all the major arteries had plenty of greenspace surrounding the roads – helping to reduce noise to residential area but also allowing easy expansion as the city continues to grow. Most roadways were currently 2-3 lanes in each direction, but there was more than enough space to add another 2+ lanes nearly everywhere. From a driving perspective it’s absolutely brilliant – but when walking around it gives the feeling of being empty.