Having hit my most anticipated attraction on my first full day in Canberra, I spent the second day across the large man-made lake visiting a few other notable places.

If I walked through this concrete…thing, and continued straight ahead I would hit the Old Parliament Building. Directly behind me (though across a lake and up the Anzac Parade) was the Australian War Memorial. Everything in nice straight lines. But I wouldn’t be visiting Parliament just yet…I went here instead:

The National Gallery of Australia. A massive building dedicated to Australian Collections, with a few visiting items as well (such as a big Jackson Pollock). As far a galleries go, I didn’t like this one. Too big, vacuous and way too much modern (read: crap) art. But it was free and I spent about an hour there, before heading to a much better destination.

This was the Prime Minister’s Office, a simple affair. Much like Canada, the PM is the leader of the party in power.

And finally the lower house, the House of Representatives. Equivalent to our House of Commons, this is the one that features the Prime Minister amongst the other elected Members of Parliament. It is, much like Canada, where most of the laws and decisions of the country get voted on. It also features the most squabbling of the parties.

But all of those rooms have been left in the past. The Old Parliament had been antiquitated and a New Parliament was in use. And I just so happened to be there on a day I could really see it in use.

It was a surprising building. I always pictured Parliament buildings as old, historic buildings. Being so new, the New Parliament was very modern, bright and shiny.

One of the main halls was being set up for a large banquet that evening.

My timing couldn’t have been more perfect though – I had shown up (unwittingly) on a day when Parliament was in session, and I arrived right before Question Period time – when the debates and arguments happen. I couldn’t take my camera, but I did check out both Houses in person. The Senate was pretty sedate and didn’t gather much interest from the average person. The House of Representatives on the other hand had a lot of people looking in – and in the new Parliament, the room could house hundreds of peering eyes. It was a great set up to watch the children of Parliament at play. And they really did act like children. Name calling, interrupting each other, dismissive noises, ignoring each other’s points, talking over each other…these are the leaders of a nation at work. It was both amusing and sad to see in action. I was glad I got to see it though, and it was also the closest I would get to meeting my second Prime Minister (Julia Gillard in this case) in as many years. But alas, Australia’s PM didn’t have any meet and greet time for random Canadians. 🙂

I went back outside and climbed up the side of the New Parliament. Ya, it’s got grass going up to the top. A little bit strange, but a very unique building. It kind of feels like it was build as a bomb shelter.

Finally, looking back out from the side of the New Parliament towards the Old Parliament, Lake Burley Griffin and the ANZAC Parade in the distance. 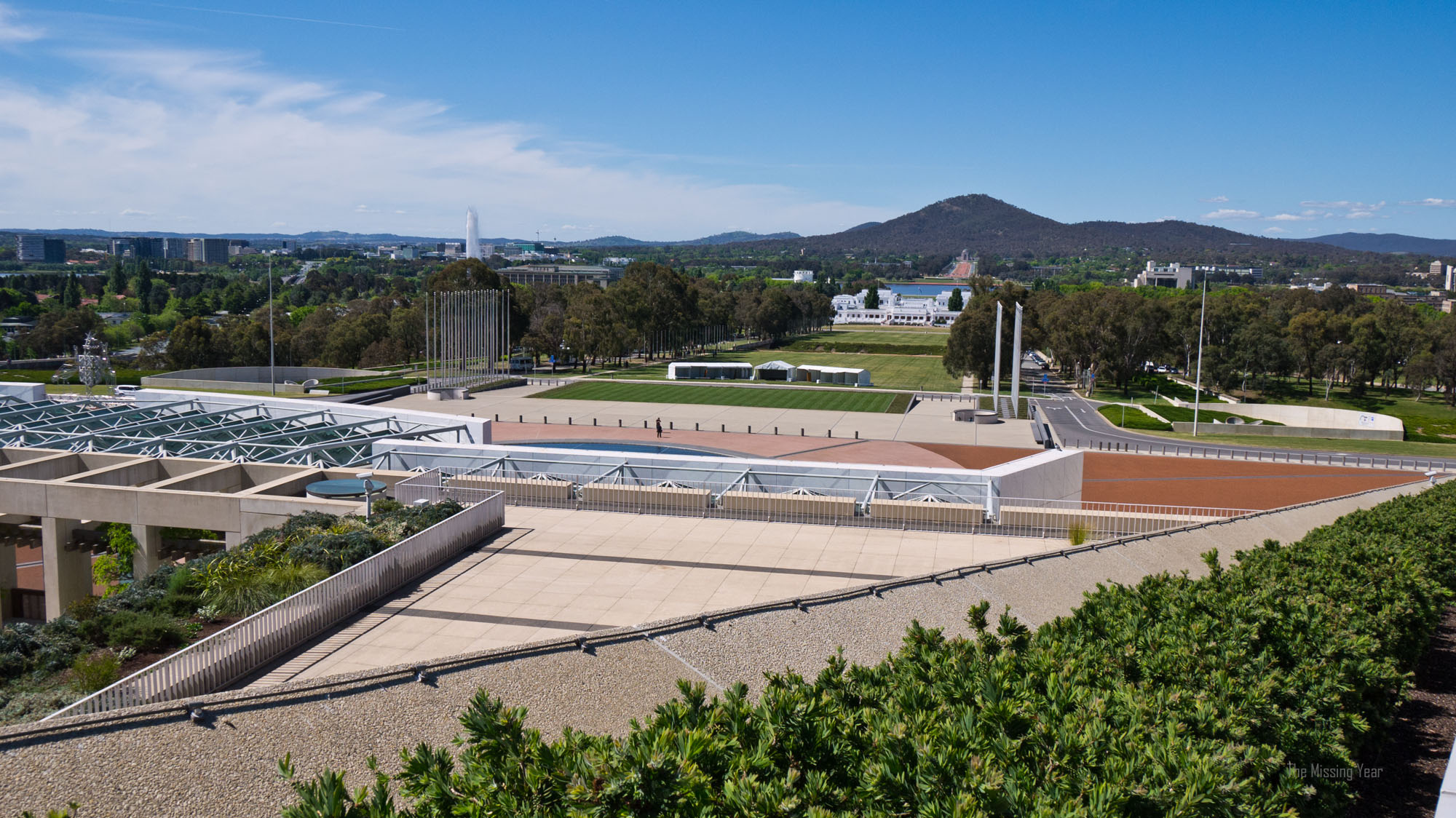 I didn’t do too much more in Canberra after that. I wandered a bit more of the city but mostly felt it a little hollow and empty still. That being said, it was amazingly well engineered – a fully planned city from the ground up. A unique place to see at any rate, and I was glad I had visited.

One thought on “Old and New”