While I did indeed make it over to Waiheke Island today in one piece and have settled in with a friendly family here on the island, my last day in Auckland was relatively eventful. It started normally for me, waking up, showering, having breakfast – I’ve been eating through my bread and a 1kg tub of Peanut Butter – and then heading out for the day. I hit the Auckland Central Library first to check email and the like, and from there I decided I would do something for my last day – do a harbour tour. While my hip is healing it’s still not 100%, so I figured a tour by boat would be a good way to spend a day, and wasn’t too expensive. It had the added bonus of giving me a free return ticket to Devonport, an small town on the opposite shore that has a nice boardwalk. So I bought my ticket for 130pm and off I went.

I didn’t make it far from the Library (Queen Street – the main street downtown) before I noticed a very large crowd of people lining the streets. Not knowing what they were waiting for, naturally I stop and wait with them. A few minutes later, it was a parade coming down the hill. Not a typical parade, but a topless parade, I kid you not. Promoting the Erotica Expo or something going on this or next weekend, I’m not quite sure. Quite unexpected, and there was something for men and women alike in the crowd. Either way, no pictures to be posted here, sorry. 😛

After the parade passed I made my way down to the harbour area and stocked up on chocolate. I grabbed something called a Cadbury Moro. It’s description was Chocolate, Caramel and Nougat – they really should have called it a ‘Mars’ bar, but that name is already taken…

It is interesting reading about the Moro, as Mars bars do indeed exist here as well – the Moro is largely a Kiwi favourite, and sells more than any other Cadbury chocolate here. Not surprisingly, it also outsells the Mars bar. Still, tasty.

On the boat, it was a beautiful day so as we left the harbour area I took some shots. 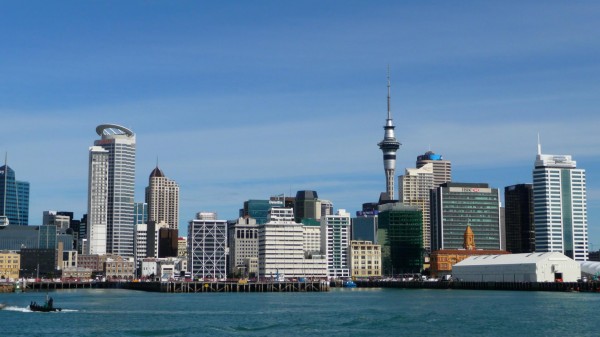 The tour itself was a bit lackluster – I couldn’t hear half of what was being said and I think it was a recording anyways – somewhat bland. But, it was enjoyable sitting on the top deck of the boat (if a wee bit chilly with the wind), and enjoying the scenery. We eventually made it to our one brief stopping spot – Rangitoto Island.

An ancient volcano (as are most hills in this area), Rangitoto’s main attraction is the hour long hike to the peak – I wasn’t in any condition to attempt that, and the tour I was on only stopped for 10 minutes, so no such attempt was made by myself. Another time perhaps. On a clear day it supposedly gives great views of Auckland and the other surrounding islands (there are many!).

Our little boat made our way around a few other spots in the sizable harbour before passing under the large Harbour bridge, the main link from Auckland to the North Shore.

Once back on shore, I quickly hopped onto a nearby ferry to get me over to Devonport. There, I took about an hour walking around the downtown and surrounding neighbourhood. It was suitably quaint and peaceful.

After that, exhausted from my much busier day than normal, I headed back to my hostel for dinner with my roommate Peter and a couple others from the hostel, before packing my stuff and falling asleep for the last time (for now) in Auckland City!