The next morning Tam and I got a tasty breakfast from a small cafe and hit the road. We had a bit of driving to do to get to our destination for the day/night: Freycinet National Park.

There were only a few stops along the way. First up was the Spiky Bridge. There isn’t much to the bridge beyond some history – built by convicts back in the 1800s. The reasons for the spikes are unknown, but some believe it was to prevent cows from apparently jumping off the bridge. I wasn’t aware cows were that suicidal…or dumb. 😛

Moving on…we next stopped somewhere much more exciting. Kates Berry Farm! Home to desserts and berries, it had some yummy ice cream and chocolate covered treats for us. Plus, it had a nice view on their property. We could see our final destination in the distance!

Getting closer now to Freycinet, we made a quick roadside stop for pictures.

Finally we arrived! It actually isn’t that long a drive, though Tasmanian roads can be tiring due to their relentless hills and curves. Our hotel for the night would be a bit different – single cottage style! We were situated right in the national park itself, a fantastic location to be. Quiet, remote and lovely. The cabins matched the surroundings.

The interior of the cottage was great, with modern ameneties and high ceilings. Fantastic little spot in nature! But we weren’t here just for a cute cottage…

We had a hike to do! With the winter of Tasmania bringing short daylight hours, we were a little pushed for time for this hike. We were going to see the famous Wineglass Bay. This is the view that was behind us as we hiked up a hill.

Stony peaks rose up on both sides of us. Thankfully we wouldn’t need to summit them, we were heading for the saddle between them.

And at the Saddle, we had this view. Wineglass Bay, not named for the reason people would think (the shape), but because in the 1800s it was used for whaling and the blood from the whales would stain the sands red. Much more peaceful now, it was very pretty and picturesque and from the long shadows you can tell we were chasing daylight at this point. But our hike wasn’t quite finished yet. We wanted to get to the beach of Wineglass Bay before heading back!

We made it, though shortly after the sun had slid behind the hills we were just climbing. The beach was cold but we had it too ourselves in the late afternoon.

Looking back to where we had come, the hilly peaks rising up from the ocean. We’d have to climb back up to get back to our car…

And so we did. On our way down we were treated to a fun light show as the sun started it’s final descent.

We made it back to the car and quickly drove a short way down the road to Honeymoon Bay, a spot we had been told was great for sunsets. We thought we were out of luck when we got there, with a mostly grey sky greeting us. 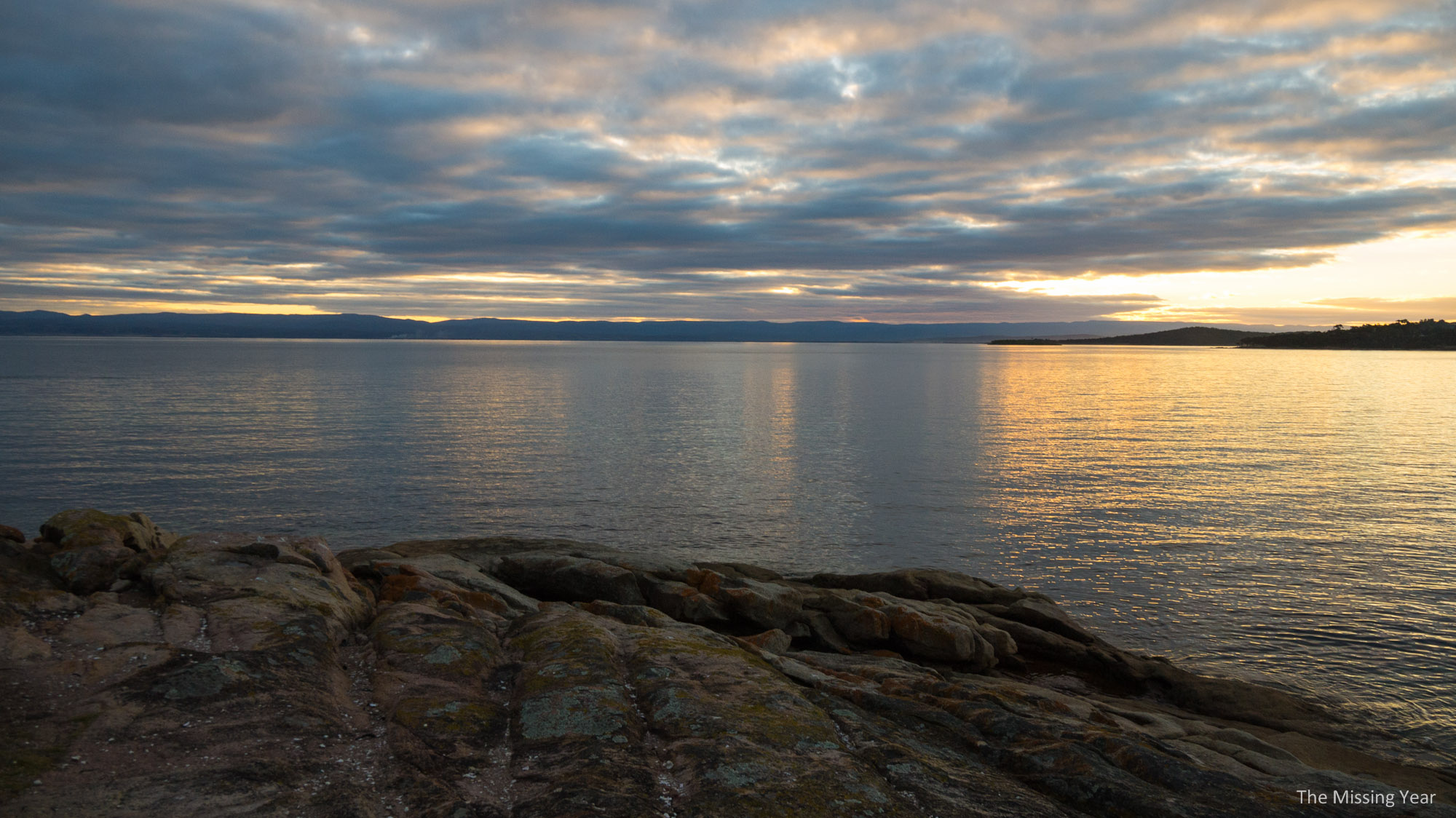 So instead we just enjoyed the surroundings in the dimming daylight.

We even found heaps of Wallabies out enjoying a snack. They didn’t seem to mind the human presence in the slightest.

We returned to the water to get the sunset show we were expecting.

The clouds gave off a magnificent glow as the sun settled below the hills on the horizon.

After the fantastic light show, we headed off for dinner in the nearby town. Delicious food that night was eaten, including crispy pork belly, creme brule and scallops (something Tam had every day in Tassie, she loved them!). Another great day in Tasmania.

One thought on “Tassie with Tam, Part 2”